Black roly-poly is a spiny, dense, short-lived shrub. It is problematic in temperate and semi-arid regions.

Black roly-poly is a native plant of the Chenopodiaceae family, which includes other roly-poly plants, saltbushes and crumbweeds. It is regarded as a weed because it is generally not eaten by livestock due to the length of its spines, its burrs and spines contaminate wool, and it competes with plants that do provide feed. Black roly-poly has similar impacts to galvanised burr (Sclerolaena birchii) but is less likely to be grazed due to the greater length of its spines.

Dense infestations occur periodically, causing concern to graziers as it reduces wool values by causing vegetable fault. Spines that become detached from the burrs are problematic for wool-processing as they can become aligned with the wool fibres in spun yarn. Black roly poly is only one of many species that can cause this type of fault in wool.

The spines and burrs are a considerable nuisance to shearers, stock and working dogs. At times when shearers are in high demand, they may choose to avoid shearing where sheep are carrying large numbers of burrs. Dense infestations also impede stock movement and block cultivation machinery.

Black roly-poly is a hemispherical, short-lived, perennial shrub about 1 m in height and diameter, with slender tangled branches.

Flowers are solitary in the leaf axils and flowering occurs most of the year.

Fruiting bodies (burrs) are tube-like, 1-2.5 mm long with an angled base, with 5 slender spreading spines at the top. The three longest spines are 4-10 mm long. The two shorter ones occur close together, often joined at the base.

Stems and leaves are hairless. Leaves are dark bluish-green, 6-20 mm long, 1-2 mm wide, and tapered at both ends.

Stems have a covering of woolly hairs. Leaves are an elongated egg shape, 5-10 mm long. The upper surfaces are hairy and the lower surfaces slightly downy.

Black roly-poly is generally restricted to central and western areas of NSW and Queensland, and grows primarily on clay and clay loam soils. Due to the greater moisture holding capacity of these soils black roly-poly can be found in more arid areas than galvanised burr (Sclerolaena birchii).

Black roly-poly is a short-lived perennial. Seeds germinate in autumn after rain and plants develop a deep tap root during winter.

Mature plants flower throughout the year. Seed develops within the spined woody burr that is firmly attached to the stem. Each burr contains only one seed but large bushes produce many burrs. Mature seed is sealed within the burrs and receives no sap flow from the mother plant allowing seeds to remain viable after the plant itself dies.

Mature plants are usually short lived. Many plants die within two years and few plants survive for more than four years. When a plant dies its tap root breaks allowing the dead bush to roll in the wind. Seeds are distributed as stem segments and burrs break off. Dead bushes commonly accumulate along fencelines. Stem pieces and burrs can also be spread by animals.

The woody burrs must breakdown enough to allow water to enter so that the seed can germinate. This process takes between 1 and 4 years depending on whether the burrs remain on the surface or are buried.

Over a period of years the density of populations will wax and wane. Numbers of plants fall close to zero during long droughts and rise sharply when seasonal conditions are more favourable to germination and growth. The slow breakdown of the woody burrs during long droughts can create large numbers of viable seeds in the soil (the seedbank).

Black roly-poly is native to the temperate and semi-arid regions of New South Wales (NSW) and Queensland, growing primarily on clay and clay loam soils.

Clearing of native vegetation on rural land is legislated by the Local Land Services Act 2013 and the Biodiversity Conservation Act 2016. Seek advice from Local Land Service regarding the restrictions and requirements associated with clearing black roly-poly.

Black roly-poly can be suppressed by a range of techniques, however a high level of control on grazing land is generally not economically justifiable.

The aim of a control program on grazing land should be to minimise the amount of seed entering the seed bank by reducing the numbers of large plants. This approach will reduce the occurrence and severity of future infestations.

Plants can be grubbed from the ground and heaped for burning using a tractor-mounted blade. Seedlings will establish after the parent plants are removed and cultivation can then be used to control the populations of seedlings.

Spray actively growing plants. Ensure that all of the foliage is covered in herbicide. Herbicide does not kill the seeds inside the burrs so burning plants or continued follow up will be required.

Seedlings are unlikely to establish from seed buried to a depth of 40 mm or more. Ploughing arable areas with an implement that inverts the soil will reduce the size of the viable seed bank in heavily infested areas. 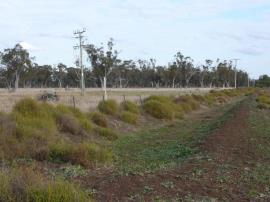 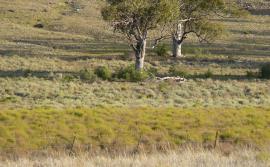 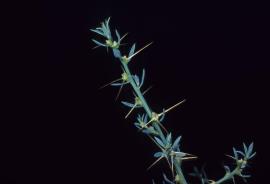 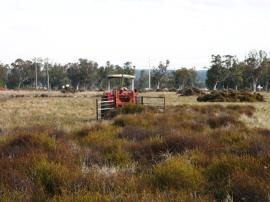