Blue hound’s tongue is a biennial herb. Its leaves are toxic to livestock, it could cause problems if it becomes established in Australia.

Blue hound’s tongue is a biennial herb that has been reported to be a problem weed in Argentina and Chile. It could cause problems if it becomes established in Australia as its leaves are toxic to livestock.

The leaves of blue hound’s tongue contain pyrrolizidine alkaloids that kill cattle and horses. While cattle usually avoid it in the field, the problem occurs when they are fed hay or chopped forage containing the plant. It also hinders the establishment of new pasture.

Blue hound’s tongue is a biennial plant which grows up to 600 mm high.

Its stems are densely covered with fine hairs. It has dark-green leaves, up to 200 mm long and 25–35 mm wide, covered with long coarse hairs. The base of the leaf is heart-shaped and clasps the stem. The leaves are alternately placed and decrease in size up the stem.

Blue hound’s tongue has a long taproot which is used to store energy reserves. In the first year of growth, blue hound’s tongue forms a rosette; this is followed by one or more tall flowering stems during the second growing season.

The flower, a 10–11 mm long tube, is pink to blue and has darker hairless veins and stamens growing from the base of the tube. Each flower produces four ‘nutlets’ covered with short, hooked or barbed prickles when mature.

The seeds are oval and 6–8 mm long, and their outer surface is thickly covered with prickles.

Blue hounds's tongue was first recorded in Sydney, in 1898. In 1933 a naturalised population was noted in Eden, NSW, and its presence was confirmed until 1976. Two new infestations have been recorded in 2004 upstream from Eden, along the Towamba River.

Blue hound’s tongue spreads by seeds, mature plants each producing several hundred. The seeds have hooks that attach to clothing and hair very easily, so they can be spread long distances attached to people or animals. Because most seed germinate soon after formation and seed viability is only 2–3 years, there is little development of a soil seedbank. Seedlings are fast growing. In North America, cattle and wildlife are important dispersers of the closely related C. officinale. This is likely also to be the case in Australia, a view supported by the fact that blue hound’s tongue is spreading to upstream areas in NSW. Seeds may be transported by animals or people into disturbed areas where they find suitable conditions for germination.

Blue hound’s tongue is a fairly typical plant of nutrient-rich Mediterranean to warm temperate grassland communities which occur at altitudes of 0–1000 m. It is a native of southern Europe. Information from overseas indicates that blue hound’s tongue most commonly grows on disturbed sites such as road­ sides, sand dunes or open woodlands, where it establishes and spreads quickly. It can tolerate dry conditions.

In North America the closely related C. officinale has been successful in habitats disturbed by logging, grazing and other activities. It depends on the continual creation of these areas and dispersal of seeds to maintain or expand populations. It is most revalent in cool temperate climates with dry summers and a long growing season.

Because there are relatively few blue hound’s tongue infestations, and it can potentially be eradicated before it becomes established, any new outbreaks should be reported immediately to your local council weed officer. Do not try to control blue hound’s tongue without their expert assistance. Control effort that is poorly performed or not followed up can actually help spread the weed and worsen the problem. 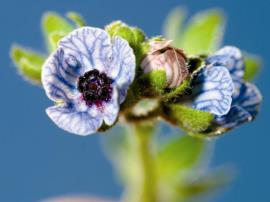 Flowers are pink to blue and have darker veins and stamens growing from the base of the tube. (Photo: José Darnaude , Weeds CRC) 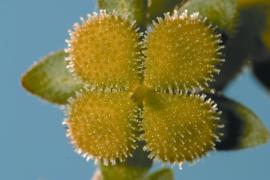 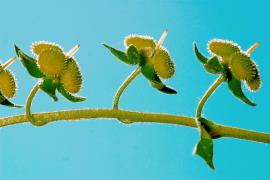 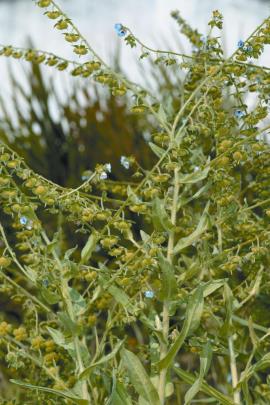