Bracken fern is a native fern that can grow up to 2 m tall. It competes with pastures and is poisonous to livestock.

Bracken fern is a native plant, but it is a weed in grazing land and pine forests. It:

All parts of the plant are toxic. Bracken contains two types of toxins that affect livestock:

Eating the young fronds can cause cancer of the digestive tract. Drinking untreated milk from cows that have grazed large amounts of bracken may cause stomach cancer.

Bracken is a fern, so it has fronds rather than leaves and does not produce flowers or seeds. Ferns grow from spores which are produced in sori on the underside of the fronds. Established bracken stands usually have a mixture of green and dead fronds. Dead fronds can stay standing for several years.

The fronds are divided and subdivided into many lobes. The fronds appear in spring and die in autumn in temperate climates but may live for up to two years in milder climates.

The sori which contain spores are rare but can be found along the edges on the undersides of the fronds. They often form a continous line.

The roots are extensive and dense. The rhizomes are:

Bracken fern is native to Australia. In NSW it grows in coastal areas, on the tablelands and sometimes on the western slopes.

Bracken fern grows in temperate and subtropical areas of NSW especially along the coast. High rainfall areas in open forests and woodlands are its natural habitat. It has become invasive in pastures, especially overgrazed or degraded pastures, pine forests, along roadsides, fence lines and railway lines, and on industrial sites.

Bracken fern produces spores that are usually dispersed in late summer to autumn. This can vary in different years and across different locations. Spores are spread by the wind and germinate in moist, sheltered situations.

Rhizomes spread out from a parent plant when new shoots grow up from the rhizomes. Infestations thicken and grow larger over time. Machinery can carry rhizomes to new areas.

Successful weed control relies on follow up after the initial efforts. This means looking for and killing regrowth or new plants. Using a combination of control methods is usually more successful.. Regrowth from rhizomes makes bracken persistent.

Clean cultivation equipment after use near bracken fern\.

Pasture improvement can be used to outcompete bracken fern. If sowing pasture, choose species or varieties of grasses and legumes that will be suited to the soil type and climate of the area. Consult your local agronomist for recommendations. To maintain healthy pastures:

Combining cultivation over two or three consecutive years with cropping before the establishment of a competitive pasture helps control bracken. Cultivate in summer to 15-20 cm deep. This will break up the rhizomes and bring them up to the surface to dry out and die. Tined implements are best for dragging the rhizomes to the surface. Disc ploughs and rotary hoes can also work. Slash or burn thick infestations before cultivating to avoid damaging machinery.

Do not cultivate steep country with shallow soils.

When: In late spring or early summer when new fronds have just unfurled.

Best results are from 3 cuts per year from late spring/ early summer to late summer/ early autumn. Repeated slashing can eventually control bracken, but it needs to be done for a minimum of three consecutive years.  This method is not suitable for steep or rocky country.

Rollers crush and bruise the fronds but are less effective than cutting. As with slashing, repeated crushing of the fronds may eventually wear down the energy reserves in the rhizome.

Using a roller is a quicker, more versatile and less expensive method than either slashing or cultivation. Rollers with a ribbed or irregular surface are best.

Fire is not an effective control technique on its own. Bracken regenerates after burning because fire does not damage the rhizomes. Burning can be used to reduce the amount of dead fronds in winter and to improve herbicide application or cultivation. New fronds have high levels of toxins so ensure burnt paddocks are not grazed when fronds regrow.

When: Late spring to late autumn when most fronds are fully unfurled.

Follow up: Wait at least 6 months before grazing or using any follow up controls because sprayed plants may take a number of months to die off.

Do not cut or roll bracken for at least 8-12 months before chemical controls.

Use recommended spray adjuvants to help the chemical to penetrate the leaves. Herbicide is most effective in late autumn. No herbicide will provide complete control with a single application.

Animals can still be at risk of poisoning if they graze bracken even if it has been treated by herbicide.

Herbicides can be used effectively as part of a pasture re-sowing strategy. Slash bracken in winter/spring and then apply herbicide in the following autumn to fully expanded fronds. Remember to leave at least 8 months from slashing to herbicide application to allow time for regrowth. Results may not be visible until the next season and then a follow-up application is recommended on any new fronds that have emerged. 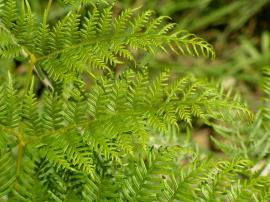 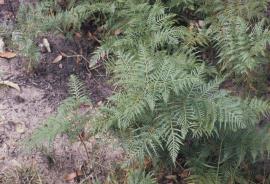 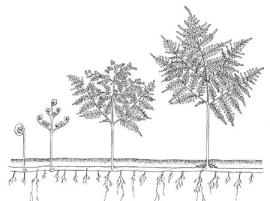 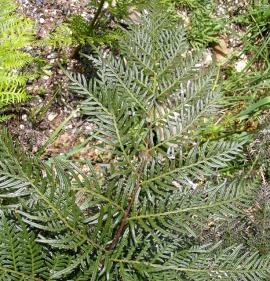 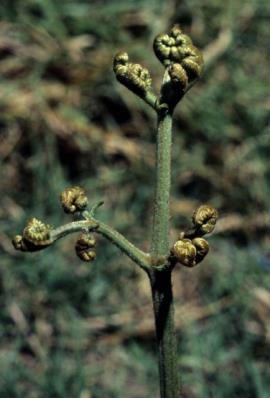 A new bracken fern frond about to unfurl. (Photo: Auld and Medd) A new frond about to unfurl. (Photo: NSW DPI)