Cape broom is an evergreen, perennial shrub. Introduced as a hedging plant, it is now a major weed of bushlands, pastures and roadsides across southern Australia.

Cape broom is an evergreen, perennial shrub that was introduced to Australia as an ornamental garden plant and hedge. It prefers temperate climates with an annual rainfall over 500 mm and is now a major weed of bushlands, pastures and roadsides across southern Australia.

Cape broom is native to the Mediterranean region, Portugal and the Azores. It is considered a major weed in many countries, including New Zealand, Chile, South Africa and the USA.

In New South Wales, Cape broom is an invasive weed of the southern and central tablelands, in particular the Blue Mountains and the Hawkesbury/Nepean catchment. It is also a problem in many northern Sydney areas and has smaller infestations located in the New England and South Coast regions.

Cape broom reproduces from seed. Most spread is by soil movement and it is possible that graders and other roadside machinery have been responsible for spreading Cape broom along roadsides and into new areas. Animals may also contribute to dispersal. Plants begin to flower and produce seeds at two years of age. Seeds are hard-coated and can survive for many years in the soil. While germination usually occurs annually, major germination and survival events generally occur after fire or soil disturbance.

Cape broom is an upright, perennial shrub growing to 3 m high. It usually has one main stem with many branches.

Cape broom can be mistaken for some native species. Correct identification is important and a local council weeds officer can assist with identification, removal and control if you suspect you have found Cape broom.

Cape broom psyllid (Arytinnis hakani) is widely established throughout southern Australia. It feeds on the sap of cape broom, reducing its health, vigour and seed set. When populations of the psyllid build up they  cause large sections of plants to dye back, occasionally leading to shrub death.

Picloram 100 g/L + Triclopyr 300 g/L + Aminopyralid 8 g/L (Grazon Extra®)
Rate: 250 or 350 mL per 100 L water
Comments: Use higher rate on trees over 2m tall. Apply as a thorough foliar spray.
Withholding period: Where product is used to control woody weeds in pastures there is a restriction of 12 weeks for use of treated pastures for making hay and silage; using hay or other plant material for compost, mulch or mushroom substrate; or using animal waste from animals grazing on treated pastures for compost, mulching, or spreading on pasture/crops.
Herbicide group: I, Disruptors of plant cell growth (synthetic auxins)
Resistance risk: Moderate 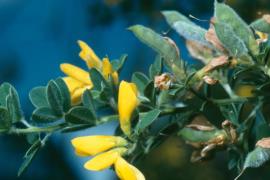 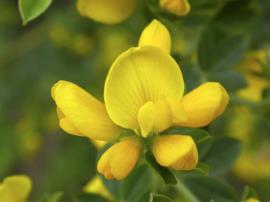 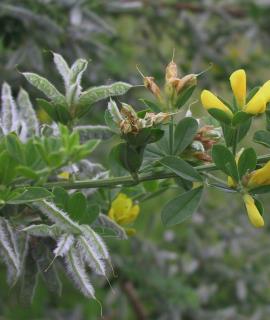 The leaflets are in groups of 3 with the centre leaflet being slightly longer than the outer two. (Photo: Jackie Miles NSW DPI)