Cherry guava is an evergreen tree or shrub that can rapidly form dense thickets. It has naturalised in coastal areas and become a significant environmental weed on Lord Howe Island.

Cherry guava is an evergreen tree or shrub that can rapidly form dense thickets. It has naturalised in many coastal parts of Queensland and New South Wales and become a significant environmental weed on Lord Howe Island.

Cherry guava is an invasive woody weed that infests forests, woodlands, forest margins and grassland areas of tropical and sub-tropical areas. Able to tolerate shade, it completes with the understorey species of native rainforests, changing the biodiversity and structure of the forest. The invasiveness of this plant allows it to out-compete all other species present, forming a monoculture.

Cherry guava has been recognised as an important environmental weed in the Pacific region. It has been ranked as one of the world’s 100 worst invasive weeds by the International Union for the Conservation of Nature.

Cherry guava commonly grows 1–3 m in height but can reach heights up to 6 m.

In Australia Psidium cattleyanum is also referred to as:

Native to Brazil and Uruguay. Cherry guava has naturalised in Portugal, South Africa, La Réunion, the Seychelles, Mauritius, New Zealand, the USA, Hawaii, Micronesia and French Polynesia. It is considered one of the worst forest weeds of Hawaii and has had devastating effects on native habitats in Mauritius.

Originally introduced as an ornamental plant with edible fruit. It has escaped cultivation and was first recorded naturalised in the 1890s along the Daintree River in Queensland.

Cherry guava is now scattered in many locations along the east coast of Australia. It extends along the northern coastline of NSW from Tweed Heads through to Taree. It is a declared weed on Lord Howe Island and is also present on Norfolk and Christmas Islands.

Cherry guava reproduces from seed and vegetatively by producing suckers from the roots. Large numbers of attractive edible fruit are produced annually. Vegetative growth allows infestations to thicken and plants to spread locally. The soil surface of cherry guava infestations can often be a mat of sucker roots.

The berries of cherry guava are appealing to many animals. Birds, cattle and feral pigs feed on the fruit and spread the seed to new locations in their droppings. Seeds that pass through the gut of pigs have been found to germinate faster than those that haven’t. The rooting and trampling behaviour of feal pigs, combined with the large consumption of berries, provides a suitable environment for new cherry guava plants to grow and flourish.

Humans have also contributed to its spread by intentional plantings and dumping of garden waste in unauthorised areas.

Cherry guava is a fast growing perennial plant. It quickly produces a dense population of suckers and seedlings.

Flowering occurs throughout the year, but is more prominent during the spring and summer months. Fruit forms from late summer into mid autumn.

Cherry guava prefers a tropical to sub-tropical climate. It will readily establish on disturbed sites, but is also capable of germinating in undisturbed, intact areas such as rainforest floors.

Able to grow on any soil type, it prefers open locations such as the edge of rainforests and scrub habitats. It is also shade tolerant, allowing it to spread further into a forest over time. It does not tolerate frosts.

Physical removal is best avoided in large infestations as the roots need to be removed and destroyed, so that plants do not regenerate.

Where practical, manually uproot small seedlings and saplings that have originated from seed. Although this can be very time consuming. Take care if using any form of manual control as plants can re-shoot from the roots.

The best methods of herbicide application are cut stump, basal bark and stem injection. These methods can be conducted at any time of the year.

Always check controlled plants for re-shooting from stumps and roots. Treat as necessary. 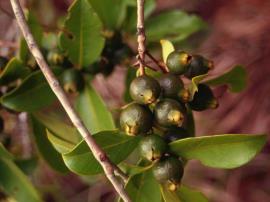 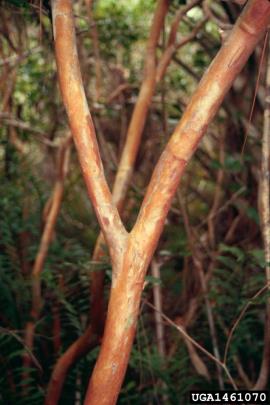 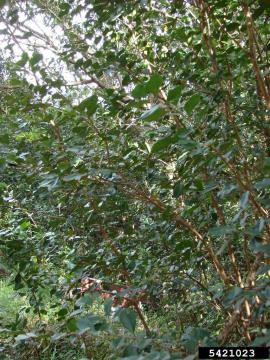