Columbus grass is a natural cross between the weedy Johnson grass and the grain sorghum. It was intentionally sown as a forage crop in tropical Queensland, but has escaped cultivation, it is now a weed of crops, pastures and roadsides.

Columbus grass is the result of a natural cross between the weedy Johnson grass (Sorghum halepense) and grain sorghum (S. bicolor). It was intentionally sown as a forage crop in tropical Queensland. Escaping cultivation, it is now a weed of crops, pastures and roadsides.

Columbus grass quickly becomes established on disturbed soils. It is a problematic weed, particularly in sorghum crops as a grain contaminant. It can easily cross breed with grain varieties and has the potential to harbour insect pests and disease of sorghum, corn and sugarcane. It is capable of invading native vegetation and areas of high conservation value.

Like other sorghum species, after periods of low rainfall or drought, the young dark coloured regrowth can produce high concentrations of cyanide compounds and nitrates that are toxic to stock. Tall dense infestations can also cause safety issues when present along roadsides by obscuring driver vision.

Native to the South American countries of Argentina, Chile, Peru and Uruguay. It was introduced as a forage crop to the USA, Algeria, Nigeria, South Africa, India and New Zealand.

Imported into Australia by CSIRO in the 1940s. It was widely sown in central and southern Queensland for forage, silage and hay. It is now a common weed throughout central and southern Queensland and northern NSW. It occurs as localised infestations in the western districts of NSW but is more prevalent in the grain growing north western slopes and plains regions. Infestations also exist in the Grafton area of the north coast.

Small isolated populations have been identified in locations throughout the Northern Territory, the Kimberly region of Western Australia and South Australia.

Columbus grass can spread by seed and rhizomes (runners). Seed is mostly spread through contaminated seed, hay and silage. It can also spread by sticking to the coat of animals, clothing, vehicle tyres and machinery. The small seeds can float and be dispersed large distances by flood waters. Viable seed may pass through the gut of animals intact and spread through their droppings.

New plants can generate from broken rhizomes, spreading the plant locally. Or they can be transported by cultivation and earth moving equipment.

Seeds germinate during the spring and summer months provided there is sufficient moisture. Seedlings undergo a period of rapid growth for the first six weeks, producing high forage yields suitable for grazing.

Flowerheads emerge from December through to April. Seeds ripen from January onwards, with most seed retained in the flower head. The small amount of seed that falls from the head can germinate immediately.

Growth slows considerably from autumn to winter. New growth begins in the spring from stem buds and rhizomes.

Columbus grass prefers subtropical to semi-arid conditions with an annual rainfall of 500–800 mm. In areas of high rainfall it lives longer and is harder to eradicate. It grows best in full sunlight on fertile soils ranging from loams to heavy clays. It tolerates drought and mild salinity, but not flooding.

Small infestations can be removed by manually digging up individual plants or spot-spraying prior to seeding.

Large and dense infestations may require a combination of cultivation, herbicides and competing crops.

Summer cultivation before seed heads form will give some control, followed by herbicide on regrowth. Mechanical control on its own is not a long term viable option. Stems will regenerate from the rhizomes left in the ground.

Burning or slashing may help to remove bulk of the plants. Then use herbicide on regrowth in mid to late summer.

In pasture situations, spot spraying and maintaining a strong and competitive pasture will help to prevent an infestation.

Herbicide treatment of Columbus grass is best conducted when plants are actively growing. This is usually November to March. All herbicide treatments should be monitored for regrowth and treated as required.

Seedlings and young plants are very susceptible to herbicide treatment when applied before flowering. 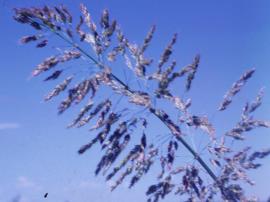 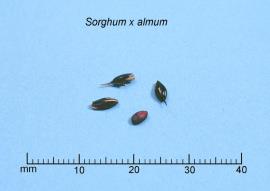