Cyperus teneristolon is a perennial sedge. It has become a significant weed of crops in Africa and is seen to be a potential threat in Australia.

Cyperus has become a significant weed of crops of the East African highlands, in particular Kenya. As it is a weed in overseas agricultural areas with climatic and environmental conditions similar to those that occur in Australia, it is seen as a potential threat to Australia’s environment and agricultural productivity.

Cyperus bracheilema is a perennial sedge which grows to 500 mm high. Sedges are evergreen plants with triangular stems that generally grow in damp areas. This species has long, delicate stolons that sprout new plants.

Stems are triangular in cross section and up to 45 cm long and 1 cm in diameter.

The leaves are 1–3 mm wide, have roughened margins and are bright green in colour.

The shape and colour of the inflorescence distinguishes C. bracheilema from all other sedge species. The main flowering spike is egg-shaped, purple to black in colour, and made up of many tiny flowers  to 3 mm long with a distinctive point. There are 3-5 prominent leaf-like bracts below the flower spike.

Fruit is dry, contains one seed and does not split open to release the seed when on the plant.

The roots are fibrous and the plant has an extensive rhizome system (underground stems).

The only known occurrence of Cyperus in Australia invades a 2 km section of the Yosemite Creek in the Minnehaha Reserve of the Blue Mountains, New South Wales. It was first recognised as naturalised in Australia in 2000, believed to be sourced from a refuse tip upstream of the current infestation.

Cyperus bracheilema is native to Ethiopia and neighbouring countries, extending to South Africa.

Cyperus is thought to have been introduced into the Australian natural environment by the dumping of garden plants at the Blue Mountains refuse tip. However, no source plant has ever been found. Cyperus is capable of spreading vegetatively, by its rhizome and stolon systems, and by seed. Its invasion of Yosemite Creek downstream from its source may have been via the movement of seed carried in the water. The whole spike will fall as one unit and eventually release the fruit (a nut) and the enclosed seed.

Cyperus prefers highland areas with soils that are sandy and poor in nutrients.

Because Cyperus has naturalised in only one known location, it can still be eradicated. Any new outbreaks should be reported immediately to your local council weed officer. Do not try to control Cyperus without their expert assistance. Control effort that is poorly performed or not followed up can actually help spread a weed and worsen the problem. 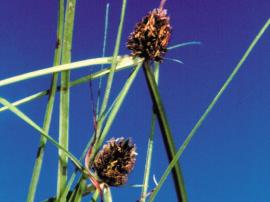 The shape and colour of the flower spikelets distinguishes C. teneristolon from other sedges. (Photo: John Hosking.) C. teneristolon has the potential to become a significant weed of crops in Australia. (Photo: John Hosking.) The flower is an egg-shaped purple to black-coloured spike consisting of many tiny spikelets. (Photo: NCW Beadle Herbarium, University of New England, NSW.)