Golden dodder is a leafless, parasitic plant. It has bright yellow, thread-like stems that twine around its host plant.

Golden dodder is a leafless, parasitic plant that removes nutrients, reduces yield and even kills its host plant. It is a threat to lucerne, vegetables, many broadleaf crops, pastures and seed crops. Seed, fodder or hay contaminated with dodder seed is banned from sale in NSW. Golden dodder is the weediest of all the dodder species that occur in Australia.

Golden dodder is the most common dodder species in NSW, and is also a major weed in Queensland, Victoria and South Australia.

The seeds can also be spread in fodder and pasture seed, and can survive the digestive tracts of birds, cows, sheep and goats.

Dodder can also be spread when stem fragments are moved on farm machinery (such as hay making equipment), on livestock, or in water. Stem fragments that have withered can regrow if there is a suitable host present.

Golden dodder is easily distinguished because its thin, thread-like stems are bright yellow and stand out clearly on the green background of the crop or pasture. Dodder has no true roots and the leaves are like scales on the stems.

Dodder is a difficult weed to eradicate. It grows rapidly and can set seed after only a few weeks of growth. Its seed can survive in the soil for long periods.

Preventing it from entering your property and being vigilant in spotting and destroying new outbreaks before they seed is the best form of control. A long-term approach is required to manage this weed. Several options are available, depending on the size of the infestation, the crop or pasture infested, and the crop or pasture rotation available. Whichever option is chosen, it is essential that treatment should begin as soon as possible after an infestation is noticed. Scattered plants can rapidly result in a major infestation which is difficult and costly to control.

Stopping the entry of dodder onto your farm is the best control measure. Early detection is necessary if dodder is to be controlled before seeding commences. Lucerne paddocks should be inspected thoroughly before first cut, to detect dodder growth. Pasture paddocks need to be inspected after rainfall in late spring. If dodder is found, control strategies need to be implemented immediately. Mapping existing infestations at the end of summer will help in checking for reinfestations the following spring. All workers on the farm should be made aware of dodder and be able to identify it.

Since dodder can be spread by seed and stem fragments, it is important to always treat a buffer zone outside the obvious areas of infestation. Look for small threads starting to invade further into the crop. Even small threads up to 5 cm can re-attach to the host crop and continued infestation will result.

A buffer zone of at least 1 m from the infestation should be treated with herbicide or burnt.

Once treated, infestations should remain marked so the effectiveness of the control can be checked at a later date.

Burning is more effective following the application of a desiccant herbicide. The area should be inspected again after one week, as dodder may re-shoot from the crowns of lucerne and weeds such as wireweed, Noogoora burr or Bathurst burr. Hotter burns will achieve higher dodder kill rates but have greater risk of killing host crops. A lucerne stand that has been burnt can regenerate from undamaged crowns without the need for re-sowing. Consult the relevant authorities prior to undertaking any burning operations.

While dodder cannot complete its lifecycle on cereal crops, it may do so on the broadleaf weeds that invade these crops. The advantage of a crop rotation for dodder control is lost if host weeds occur in the crop. In-crop weed control then becomes an essential part of crop management. If winter cereals are to be grown in an infested paddock a clean fallow should be maintained over the summer months when dodder is active. This can be achieved with herbicides or cultivation.

Where crops or pastures are used in rotations to control dodder, lucerne or susceptible legumes should not be sown for at least five years. Deep ploughing can help reduce the seed burden by burying dodder seed. Most dodder seed will not germinate from a depth of more than 7.5 cm. Infestations of dodder are less likely to occur during the establishment period if lucerne or susceptible clovers are re-sown in late summer to autumn. 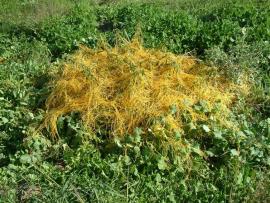 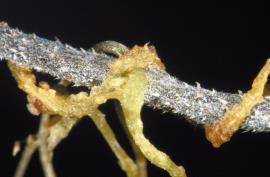 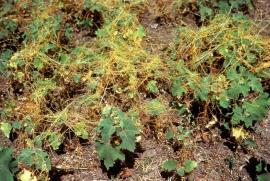