Madeira vine is an invasive climbing vine with fleshy heart-shaped leaves and aerial tubers. It smothers other vegetation including the canopy of tall trees.

Madeira vine grows very quickly and it can:

Madeira vine is one of the invasive vines listed as a Key Threatening Process in NSW. It threatens three endangered species of plants and three Endangered Ecological Communities.

Eating madeira vine leaves can cause temporary diarrhea in pigs and sheep. The effects on other livestock are not well researched. Sudden deaths have been reported, but not proven to be the result of madeira poisoning.

Madeira vine is a perennial twining vine. It flowers in late summer and autumn.

The roots also have tubers and these can be up to 20 cm in diameter.

Madeira vine mostly grows in coastal areas of NSW with summer rainfall. However, it is spreading into dryer inland areas including the North West and Central West of NSW.

It is native to South America.

Madeira vine grows in sub-tropical and warm temperate areas. It grows best in full sun or partial shade but is also tolerant of dense shade. It often establishes on the margins of rainforests and on the edges of waterways. It is partly salt-tolerant and can grow over mangroves.

Madeira vine can grow from tubers, stems or leaves. Mature plants produce thousands of tubers both along the stems and underground. There can be up to 1500 fallen aerial tubers per square meter under dense infestations. Small tubers fall to the ground as the vines mature and they can remain viable for many years, making control very difficult.

Plant parts are spread by water and by people dumping garden waste.

Madeira vine rarely produces seeds. In Australia, madeira vines have only produced seeds in Toowoomba in South East Queensland. The seeds could be spread by birds, water and movement of soil.

Successful weed control relies on follow-up after the initial efforts. This means looking for and killing regrowth or new plants. Using a combination of control methods is usually more successful.

Remove any madeira vine in gardens and dispose of all plant parts appropriately.

Madeira vine can be composted. Choose compost sites in areas that can easily be inspected and sprayed if needed. Sites should be in flood free areas and not in areas where the plant parts could be easily disturbed or moved. Contact your local council for further advice on disposal.

Dig up tubers and collect all plant parts for smaller or immature infestation sites. Dispose of tubers, leaves and stems, as they will regrow when in contact with the soil or if they are exposed to any sunlight.

If there is stress on the host plants, cut and pull the madeira vines from the canopy. When pulling the vines aerial tubers easily fall off the stems. Lay tarps or cloths on the ground to collect the aerial tubers to prevent the infestation from spreading. Cut vines can survive in the tree canopy and continue to drop tubers for up to two years. It is important to remove as much plant material as possible.

The leaf-feeding beetle Plectonycha correntina has been released in NSW and Queensland. The beetle has established and caused significant damage to madeira vine at many of the release sites.  Both the adult beetles and the larvae feed on the leaves. Leaf-feeding reduces the plant’s ability to photosynthesise and depletes the energy stores in the tubers. Only use the beetles in flood-free and frost-free areas.

To allow the beetles to establish, do not use other control methods on the release sites. For more information about biological control for madeira vine contact your local council weeds officer.

Using chemicals in warmer months will give the best results. Though, a herbicide application during late winter may allow easier access and better control during the following spring and summer months.

Spraying is suitable for seedlings and for plants growing along the ground, over structures or over other non-desirable plants. Apply herbicide to all foliage to the point of visible wetness.

If plants do not have tubers and are climbing on desirable plants, pull them off gently and spray them on the ground.

Follow up by spraying sprouting tubers when they have between 2 and 8 leaves.

Splatter guns can be used for dense infestations of madeira vine that are difficult to reach. The specialised nozzle produces large droplets. This allows plants up to 10 m away to be sprayed with limited chance of spray drift. Spray small amounts of concentrated herbicide on the weed, taking care not to spray the leaves of native or other desirable plants. It is not necessary to cover all of the foliage.

This method is suitable for vines of any size and for those with aerial tubers. It is the safest management option in sensitive environments. It is labour intensive, as every vine stem has to be treated individually.

Scrape sections of the vine down to the white fibrous layer and paint the exposed area with concentrated herbicide within 15 seconds.

Repeat the process as high up the stem as possible. If possible, scrape both sides of the stem. Do not ringbark the stem as this will prevent the herbicide spreading through the plant.

Remove and collect tubers along the stem near where they are to be scraped as they can easily fall off when the vines are being treated.

Use this method for young vines without aerial tubers. It should only be used on vines with aerial tubers if it is possible to follow up the initial control by treating all of the sprouting tubers that fall to the ground. Tubers may continue to sprout for several years.

Cut stems and apply herbicide to the part of the vine that is attached to the ground and the vines remaining above within 15 seconds of cutting.

PERMIT 13914 Expires 31/03/2026
Picloram 100 g/L + Triclopyr 300 g/L + Aminopyralid 8 g/L (Grazon Extra®)
Rate: 400 mL in 100 L of water
Comments: Handgun application
Withholding period: Where product is used to control woody weeds in pastures there is a restriction of 12 weeks for use of treated pastures for making hay and silage; using hay or other plant material for compost, mulch or mushroom substrate; or using animal waste from animals grazing on treated pastures for compost, mulching, or spreading on pasture/crops.
Herbicide group: I, Disruptors of plant cell growth (synthetic auxins)
Resistance risk: Moderate 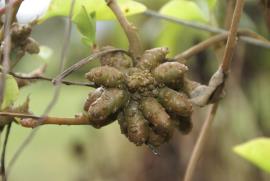 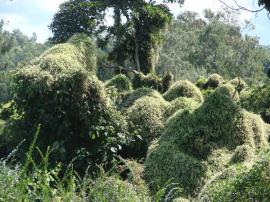 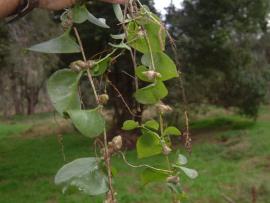 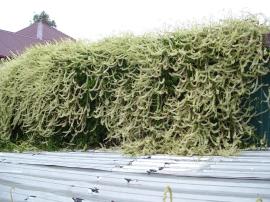