Ginger lily is a perennial ornamental plant in the early stages of invasion in Australia. It could potentially invade many wetter habitats of eastern Australia.

Ginger lily is an environmental weed in New South Wales and Queensland. It is ranked among the top 100 of the world's worst invasive species according to the Global Invasive Species Database.

It forms large dense stands, with rhizomes that can be 1 m deep. These stands can smother native understorey species, prevent the establishment of shrubs and trees and strongly modify native animal habitat.

It is one of the most shade tolerant weeds in Australia and can dominate the understorey of disturbed and undisturbed rainforests, riparian areas and other moist habitats with fertile soils.

It has the potential to be a serious weed of moist, and usually fertile, areas on the coast and tablelands from approximately Melbourne in the south to the far north Queensland highlands..

Ginger lily is a native of India, Bhutan and Nepal.

It is widely cultivated as an ornamental in many parts of the world and  has become naturalised and a weed problem in Australia, southern Africa, Reunion Islands, New Zealand, the Caribbean and Hawaii.

Ginger lily was introduced into Australia as an ornamental plant and the first recorded collection was in 1968 at Ingleburn near Sydney.

It is now naturalised from the South Coast of New South Wales to north-east Queensland, and around Melbourne in Victoria. It has also been recorded in Tasmania.

Ginger lily is mostly dispersed by seed, spread mainly by birds, but other animals as well.

Once established, plants can expand vegetatively by rhizomes. However, new plants can also develop from small pieces of rhizome, which may be spread by the dumping of garden waste.

Seeds are short-lived, with few viable after 1 year.

Flowering chiefly occurs from summer to autumn, but can occur year-round in the right conditions.

Leaves are dark green, alternately arranged and up to 45 cm long by 15 cm wide, with a membranous ligule 1.5-3 cm long.

Flowers are perfumed, pale to bright yellow and have a single long red stamen.

Fruit are 3-valved, thin-walled capsules; the inside of the valves are orange.

Seeds are bright red, fleshy and to about 1.8 cm long.

Ginger lily prefers moist habitats and fertile soils between sea level and 1700 m in subtropical and warm temperate climates. It also occurs in the highlands of north Queensland where temperatures are cooler.

It grows most abundantly in open, light-filled habitats, but can grow into deep shade.

It has been recorded as invading: riparian areas; edges of and within rainforest, montane forest, native forests and planted forests; grasslands, agricultural areas; disturbed areas; urban areas; and wetlands.

The main methods of control are excluding plants from uninfested areas, physical removal of all plant parts, and herbicide application. Which method is appropriate depends on:

Continued follow-up and re-treatment is essential for all control methods.

Plants can be dug up pulled in small to medium sized infestations, but the entire plant, including pieces of rhizomes need to be removed to avoid regrowth. This can be difficult and costly due to the deep, extensive rhizome system

Herbicide applications are recommended for medium to large infestations, but can also be used for small infestations. Foliar spray, cut stump and basal bark applications have been used to control ginger lily in Australia.

Apply herbicides when plants are actively growing. Best results are achieved during spring and summer months. 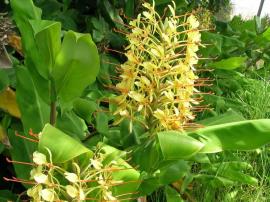 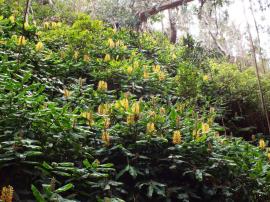 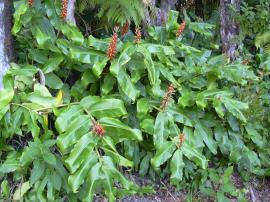 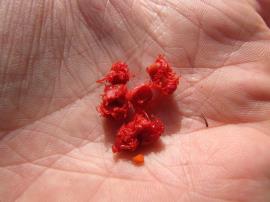 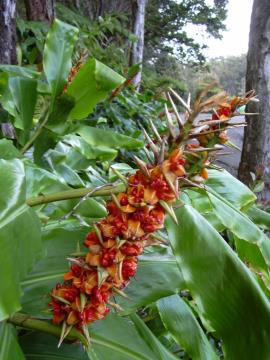