PROHIBITED MATTER: If you see this plant report it. Call the NSW DPI Biosecurity Helpline 1800 680 244
Print | Search/browse other weeds

Hawkweeds are highly invasive plants forming dense stands of up to 3800 plants per square metre. They are a major threat to biodiversity and a problem in pastures, on roadsides and in gardens.

Hawkweeds are highly invasive plants forming dense stands of up to 3800 plants per square metre. This is a major threat to biodiversity in conservation areas and native grasslands. Hawkweeds can also be a problem in pastures, on roadsides and in gardens.

Worldwide there are several hundred species known as hawkweeds. Hawkweeds belong to the Asteraceae or daisy family and were promoted as cottage garden plants. Hawkweed plants were previously sold by nurseries and these are likely to be sources of further infestations.

The general appearance of a hawkweed plant is similar to a dandelion (Taraxacum officinale) or a flatweed (Hypochaeris species). Hawkweeds are perennial herbs of variable height (15–40 cm), and have a milky sap which is seen when their stems or leaves are broken.

Four Hawkweed species are known to occur in Australia. These are in either the Hieracium or Pilosella genera and include:

Small infestations have been found around ski fields where seed was introduced on equipment from New Zealand.  Prompt treatment of known populations of hawkweeds has limited their spread so far.

*Orange and mouse-ear hawkweeds were previously grouped in the Hieracium genus as Hieracium aurantiacum and Hieracium pilosella respectively.

Hawkweed can reproduce and spread both by seed and vegetatively. Vegetative spread of plants by rhizomes (underground stems) and stolons (above ground rooting stems) is common. Stolons arise from buds at the base of the leaves.

Up to 40 000 seeds per square metre are produced in summer. Seeds have tufts that enable them to attach to hair, fur and vehicles. Seed can also be spread by wind, water, in contaminated fodder and garden waste, and even on ski or hiking equipment. The seeds can survive in the soil for many years.

Hawkweeds have the potential to be serious weeds in the temperate areas of south-eastern Australia, including the Australian Alps and Tasmanian grasslands. They are frost-tolerant and competitive across a wide range of soil types, preferring cool climates with an annual rainfall above 500 mm.

Please do not attempt to treat or dispose of this weed yourself. Report this plant if you see it anywhere in NSW by calling the helpline listed at the top of this page immediately.

PERMIT 14928 Expires 30/09/2024
Picloram 100 g/L + Triclopyr 300 g/L + Aminopyralid 8 g/L (Grazon Extra®)
Rate: 250-500 mL per 100 L plus BS 1000 or equivalent at 100 mL per 100 L
Comments: Foliar application
Withholding period: Where product is used to control woody weeds in pastures there is a restriction of 12 weeks for use of treated pastures for making hay and silage; using hay or other plant material for compost, mulch or mushroom substrate; or using animal waste from animals grazing on treated pastures for compost, mulching, or spreading on pasture/crops.
Herbicide group: I, Disruptors of plant cell growth (synthetic auxins)
Resistance risk: Moderate 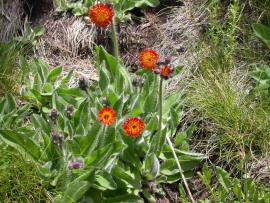 Hawkweeds are in the daisy family and are similar to dandelions. (Photo: Neville Walsh) 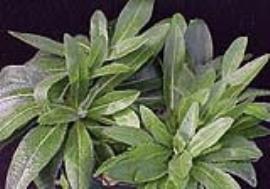 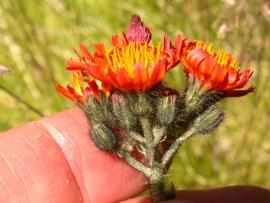 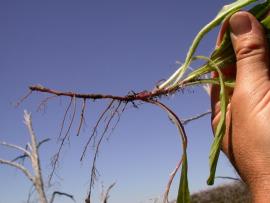 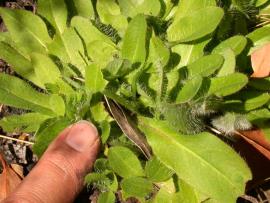 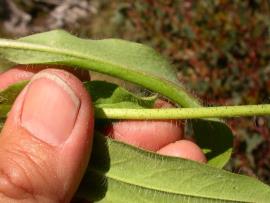