Heather varies from low-lying mats to upright bushes and dwarf trees. It is an invasive weed which threatens alpine country.

Also known as red heath, Scotch heather or ling, heather grows on poor undeveloped grassland on acid soils, and prefers frost flats, scrub and higher tussock grasslands where the winters are cold. Although heather seedlings are very small and easily outcompeted by grasses, as a mature plant it forms a dense canopy which can reduce species diversity in sensitive open upland habitats.

It is a major weed in many overseas regions, including the World Heritage Tongariro National Park in New Zealand where it is the most widespread exotic weed, and throughout North America. In Australia it has been deliberately planted in gardens and for erosion control, but so far has only naturalised in Tasmania.

Heather mainly reproduces by seed. Each plant can produce several thousand flowers and tens of thousands of seeds, with seed production potentially reaching one million seeds per square metre. The tiny seeds can remain viable for extended periods, up to 100 years, and are spread by wind, animals or walkers brushing against the plants. Seeds rarely germinate without exposure to light, and germination increases when seeds are heat treated. Vegetative reproduction can also take place via a process known as layering, where branches in contact with moist soil can take root and form new plants. Heather also resprouts from surviving stem bases after fire.

Heather varies from low-lying mat-like forms to upright ball-shaped bushes and dwarf trees, depending on its environment. It generally grows 0.5– 1.25 m tall and is an evergreen perennial shrub with woody, pliable stems. Young growth is initially densely hairy but the plant becomes hairless later.

Small, stalkless leaves grow in four vertical rows along the branches. The leaves are oblong, up to 3.5 mm long and occasionally downy. They are initially dark green and later turn brown.

It has bell-shaped flowers, comprising four petals joined into a tube about 2 mm in diameter. The flowers are generally pale purple although pink – and white-flowered plants also occur. The flowers grow on narrow leafy stalks up to 90 mm long, which occur on the upper shoots.

The tiny seeds (0.7 mm long by 0.5 mm wide) are contained in small, hairy, round capsules which are made up of four compartments.

Heather occurs in heathlands, wood­lands and above the tree line. It can colonise up to altitudes of 1500 m and is thus a serious threat to Australia’s alpine country. It is extremely frost hardy and tolerates waterlogging – it is found in wet bog communities. It is not a threat to improved pastures but could be a problem in alpine grazing lands. It does not tolerate shade and exhibits lower shoot production and reduced flowering in shaded conditions.

Because there are relatively few heather infestations, and it can potentially be eradicated before it becomes established, any new outbreaks should be reported immediately to your local council weed officer. Do not try to control it without their expert assistance. Control effort that is poorly performed or not followed up can actually help spread the weed and worsen the problem.

Because research has been limited, little is known about successful control methods for Heather. Most traditional methods are generally considered inadequate and too expensive. Any attempted control of Heather should be undertaken cooperatively with your local weed officer. Ongoing follow-up monitoring and control will be required to manage the long-lived seedbank.

Physical control
It is hard to pull or dig Heather because of its fibrous root system. Pieces of roots tend to break off and regrow. Pulling out the plants generally loosens the soil and releases large quantities of seeds, ensuring that Heather is usually the first plant to return. Frequent slashing encourages resprouting and will not kill plants.

Grazing
Intense sheep grazing pressure, especially in spring, will suppress new growth and flowering and may eventually eliminate Heather after a number of years. Large mature plants may have to be slashed first to give sheep access to new shoots. Light grazing will not be helpful.

Herbicide
In New Zealand herbicide is used to kill Heather. However, there are currently no herbicides registered for use in Australia. Contact your state or territory weed management agency for up-to­date advice.

Fire
Fire helps spread the plant as it requires high temperature for seed germination. In the United Kingdom controlled burning is used to rejuvenate older plants, which resprout following fire, especially if less than 15 years old. In established populations regular fires will actually favour the continued dominance of Heather – therefore fire is not recommended as a control method.

Biological control
The heather beetle Lochmaea suturalis, a natural predator of Heather in the United Kingdom, was released in New Zealand in 1996 but has had limited success so far. Trials in New Zealand are investigating integrated management using herbicides and biological control. Because biological methods are slow-acting processes allowing ongoing control rather than eradication, it is not envisaged that they will be used in the management of Heather in Australia, where the weed is targeted for eradication. Heather varies in shape depending on its environment. (Photo: Kate Blood.) 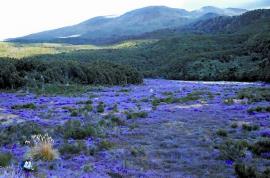 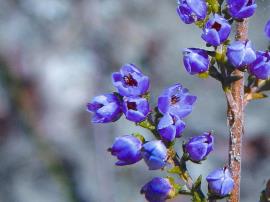 The flowers which are bell-shaped with four petals forming a tube, grow on narrow leafy stalks. (Photo: Carl Farmer.) 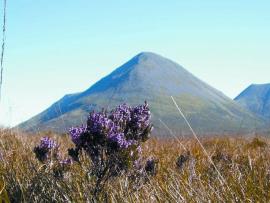 The flowers begin to develop during autumn and buds open during mid to late winter (Photo: Ralph Forbes, www.habitas.org.uk/flora )