Mesquite is a woody weed that invades open grasslands, rangelands and the banks of watercourses by forming impenetrable, thorny thickets.

Mesquite is a woody weed that invades open grasslands, rangelands and the banks of watercourses, forming thick, impenetrable, thorny thickets. There are four known species of mesquite in Australia and several hybrids.

Mesquite has a long lifecycle, very high seed production, the ability to survive droughts and long seed dormancy. These features make it an exceptionally resilient plant that can quickly take advantage of suitable environments and dominate entire ecosystems. Its deep taproot and extensive root system allow it to thrive in hot and dry conditions.

Mesquite is native to the America’s from southern USA through to northern South America. In its native range its timber is used for fence posts, woodworking and fuel. It has become an invasive weed in many parts of the world including South Africa, Hawaii, West Indies, Iraq, India, Pakistan, Sri Lanka and parts of Africa. It has also become invasive in areas of its native range, particularly southern USA.

Originally planted as a fodder, shade and ornamental tree in northern Australia, mesquite was also planted around mining sites for soil stabilisation and dust reduction. It has now spread throughout mainland Australia, with the worst infestations occurring in the Pilbara region of Western Australia, the Barkly Tablelands of the Northern Territory and western Queensland.

In New South Wales (NSW), infestations of mesquite have mostly occurred throughout the Broken Hill and Milparinka areas in the Western Region. Isolated plants are in the south-western Riverina district and in the north-western areas of Gilgandra, Coonamble and Bourke. Mesquite has the potential to invade all areas of western NSW.

Mesquite reproduces by seed which is dispersed when livestock feed on seed pods (seeds pass through the digestive tract and remain viable), and when pods and seeds move in flood waters. Native and feral animals also assist in spreading mesquite by eating the sugar- and protein-rich seed pods.

Each plant is capable of producing thousands of seeds per year that can remain dormant in the soil for very long periods. Seeds will only germinate once the hard outer casing has been damaged allowing moisture into the seed. Animal consumption, fire and wet conditions can effectively damage the seed casing and trigger germination.

To reduce the risk of spread it is recommended that during summer months livestock be removed from paddocks where mature seed pods are available; and be quarantined from mesquite areas for at least one week before being transported.

Mesquite can be either a single-stemmed tree (up to 15 m in height) or a multi-stemmed shrub with drooping branches (3–5 m high). The whole plant has an untidy appearance with single branches extending outside of the main canopy.

Mesquite can be managed by a variety of control methods. The control program for mesquite will depend on the size of the infestation and the species present.

Identification of mesquite can be difficult due to the variations in growth from. If you suspect you have found mesquite contact your local council weeds officer who will assist with identification, removal and eradication.

Four biological control agents have been released in NSW for mesquite control. Two seed beetles (Algarobius propsopis and Algarobius bottimeri), a leaf tier (Evippe sp.) and a psyllid (Prosopidopsylla flava). A fifth agent, a stem borer (Oncideres rhodosticta) is under investigation and has not yet been released.

Picloram 100 g/L + Triclopyr 300 g/L + Aminopyralid 8 g/L (Grazon Extra®)
Rate: 350 mL in 100 L of water
Comments: Controls seedlings, plants in full leaf and flowering before podding. Thoroughly wet all foliage, stems and soil around the base of the plants. Add a wetting agent to increase efficacy. Do not spray plants bearing pods.
Withholding period: Where product is used to control woody weeds in pastures there is a restriction of 12 weeks for use of treated pastures for making hay and silage; using hay or other plant material for compost, mulch or mushroom substrate; or using animal waste from animals grazing on treated pastures for compost, mulching, or spreading on pasture/crops.
Herbicide group: I, Disruptors of plant cell growth (synthetic auxins)
Resistance risk: Moderate

Triclopyr 240 g/L + Picloram 120 g/L (Access™ )
Rate: 1.0 L in 60 L of diesel (or biodiesel such as Biosafe).
Comments: Basal bark application for plants with stems less than 5 cm diameter at the base. Liberally spray the bark around the stem from ground level to 30 cm high, wetting thoroughly to the point of runoff. Cut stump application for plants with stems up to and over 5 cm in diameter. See label for information about using biodiesel.
Withholding period: Nil
Herbicide group: I, Disruptors of plant cell growth (synthetic auxins)
Resistance risk: Moderate 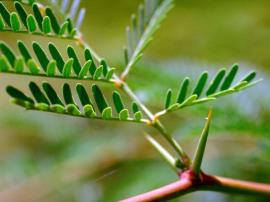 Mesquite has pairs of spines at the base of the leaves. (Photo: John Hosking NSW DPI) 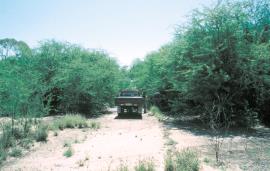 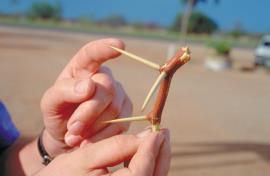 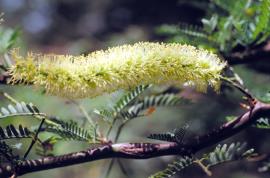 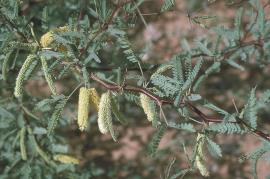 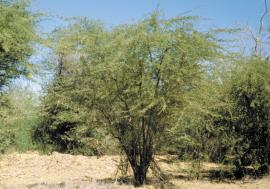 Mesquite often has many stems at the base. (Photo: Colin G. Wilson) 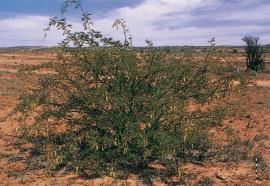 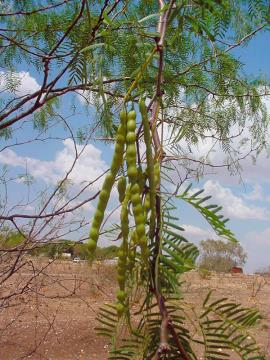