Spiny burrgrass is a summer-growing grass. It can spread rapidly to develop large infestations.

Spiny burrgrass is a weed because of its sharp and clingy burr, ability to spread rapidly and tendency to develop into dense infestations in favourable conditions. It is also difficult and expensive to manage, especially in marginal rainfall areas.

Mature burrs cause a range of problems such as:

Spiny burrgrass is commonly found in drier regions with rainfall of 250 to 600 mm. It prefers sandy to light soils and is generally not found on heavy clay soils. It readily establishes on disturbed sites such as roadsides, creeks and riverbanks.

Spiny burrgrass has spread extensively throughout NSW because of:

The major spread of this weed is by seed. The seed is well equipped for spread because of the barbed spines on the burr, which detach easily from the mature plant.

Seeds are normally produced from late spring to late autumn depending on available soil moisture. There are up to three seeds produced by each “burr” resulting in each plant producing up to 1000 seeds. The first-formed, or primary seed, is the largest and is capable of germinating within a few months of maturity. The other seeds, or secondary seeds, are usually dormant for up to three years.

Spiny burrgrass has several germination regulating mechanisms to ensure its survival during hot, dry summers. The germination process is slow. It is reliant on extended periods of moist soil and is suppressed by light and high temperatures. The seed needs to be buried a few centimetres to maximise germination. Germination generally occurs in spring allowing seedlings to establish during a period favourable for growth but it can occur at any time of the year provided soil temperature and moisture are suitable.

Dormancy of secondary seeds is prolonged by exposure to light on the soil surface or by burial under dense vegetation. Exposure of seed to high or low temperatures will also induce dormancy with the optimum temperature range for germination being 10°C to 20°C. Both primary and secondary seeds have the ability to establish from depths of up to 20 cm below the soil surface.

Spiny burrgrass is a summer-growing grass that forms large clumps and generally grows to 30 cm but can reach 60 cm or more.

The species C. spinifex can be either annual or perennial depending on the environment. The other Cenchrus weed species are annuals. In many areas of NSW, C. spinifex is usually killed by frosts and therefore acts as an annual.

For each plant, several stems grow from the base and can be either erect or spreading.

The leaves can be up to 20 cm long and are smooth but sometimes twisted and finely serrated.

The roots are fibrous and usually shallow but can be more than 30 cm deep in some soils.

The flowers are a spike-like panicle, 3–8 mm long and consisting of up to 40 ‘burrs’. The burrs are straw-coloured, sharply pointed, rigid, with finely barbed spines up to 7 mm long and a purplish colour in C. longispinus and up to 5 mm long in C. spinifex.

Spiny burrgrass prefers sandy to light soils and is generally not found on heavy clay soils. It readily establishes on disturbed sites such as roadsides, creeks and riverbanks.

The key to the effective control of spiny burrgrass is to prevent seeding and exhaust any reserves of seed in the soil. This can be achieved through integrating cultivation, herbicide application, increasing competition through good pasture establishment and management and cropping.

A management strategy should consider any physical and climatic limitations and cover a three to five-year period.

Prevent spiny burrgrass from spreading by: excluding livestock from infested areas especially when burrs are likely to adhere to livestock and thoroughly cleaning any vehicles or machinery used on site before leaving. It is important to restrict vehicle access and/or notify anyone who may be accessing the infested site to ensure that they also practice good hygiene.

Control of infestations on roadsides

Infestations can occur as a result of moving livestock, contaminated road graders or road building material. The integration of several control options is necessary in these situations. The application of non-selective herbicides can be followed by cultivation to remove established seedlings or burning the dead plants, in suitable conditions, to destroy the remaining seed heads. It is also useful to put up signs where infestations occur to alert others of the presence of spiny burrgrass and of restrictions on moving machinery or livestock through the area.

Once the seed reserves have been depleted, summer-growing perennial grasses such as Consol lovegrass, Rhodes grass or kikuyu should be established along roadsides to provide competition to germinating weed seedlings.

Maintaining vigorous perennial pastures is critical to prevent spiny burrgrass from becoming dominant. Spiny burrgrass does not establish readily in situations where there is competition from other vegetation. Good ground cover in spring and summer will limit germination and seedling establishment. Management of existing and native naturalised pastures should aim to maintain perennial grass content and ground cover. Identify the species present, their growth cycles and their response to grazing and fertiliser to formulate a management regime that will maximise their competitive behaviour.

Establishing perennial pastures is expensive so thorough preparation and research into suitable species and varieties is required. The establishment of adequate plant numbers is the first step to a successful pasture. Seek advice from your agronomist on the best pasture establishment steps for your situation.

Competitive summer grasses such as Rhodes grass, Premier digit and Consol lovegrass have proven successful in controlling spiny burrgrass on sandy soils. These grasses are summer-growing perennials and are excellent competitors where the weed is a problem. They establish readily, are drought-tolerant and are reasonably palatable to stock (depending on grazing management).

Ideally, these summer grasses should be sown with an annual legume suitable to your area such as a subterranean clover, medic or serradella. Lucerne may also be included if the soils are not too acidic.

In the vegetative stage, spiny burrgrass is readily eaten by livestock. In paddocks dominated by spiny burrgrass heavy grazing may be used to suppress growth and production of burrs as a short term management strategy. However, it has limited value if the spiny burrgrass infestation is sparsely scattered throughout a paddock. Stock have the potential to spread infestations so it is important to remove stock before seeding commences.

In paddocks that have sparse infestation overgrazing must be avoided. Every effort must be made to keep pastures competitive to prevent dominance by spiny burrgrass.

Timely cultivation to bury the burr or remove surface cover will increase germination and lead to the rapid exhaustion of dormant seeds in the soil.

Follow-up cultivation or the application of an appropriate knockdown herbicide is required to remove the resultant seedlings before they set seed. Under warm, dry conditions this might only be four weeks after germination.

If using only cultivation, repeated workings over a prolonged period will be required to control subsequent seedlings. Intermittent cultivation will create conditions which are ideal for the germination, growth and reproduction of spiny burrgrass, potentially leading to dense infestations becoming established. Avoid over-cultivation as this can increase the risk of soil erosion and soil structural problems such as compaction or surface crusting.

In arable situations a management strategy may involve one or two cultivations during spring and summer combined with fallow spraying. Alternatively, the cultivations may be followed by the application of a pre-emergent herbicide and sowing with a winter crop such as wheat, barley, triticale or lupins.

Some landholders have eradicated spiny burrgrass by using a combination of cultivation and knockdown herbicides for three to five years to prevent any plants present from seeding.

Cropping prior to pasture establishment

A post emergent application of a selective grass herbicide might be required to control any burrgrass that has escaped the pre-emergent herbicide.

Spiny burrgrass can be a problem in permanent horticulture, particularly as a contaminant of dried fruit. Management can be difficult, particularly in irrigation situations, but will generally involve the integration of control options such as close mowing of cover crops, inter-row cultivation, physical removal of isolated plants, the application of non-selective herbicides and good farm hygiene practices to prevent the spread of burrs.

For advice on the management of spiny burrgrass in horticulture consult your local horticulturist or refer to the DPI publications Grapevine Management Guide or Orchard Plant Protection Guide.

Herbicides can play an integral role in the control of this weed but are best used in a strategy incorporating cultivation, crop rotation and pasture improvement.

Pre-emergent herbicides with soil residual properties have been successful in the control of spiny burrgrass in broadacre crops such as cotton, sunflowers, soybeans, pulses, lucerne and vegetables. However, because seeds can germinate from depths of up to 20 cm, pre-emergent herbicides are not always completely effective. In the event of germination, post-emergent grass herbicides can be considered in broadleaf summer crops and lucerne. Obtain advice from your local agronomist before undertaking this option.

Non-selective knockdown herbicides will kill existing plants but repeated applications are necessary to control subsequent germinations. These herbicides are best used in situations such as fallows, along fencelines and along roadsides. They are best applied when the weed is actively growing (late spring/early summer) before the burrs are produced. 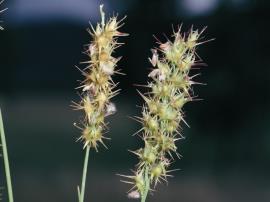 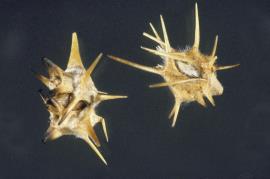 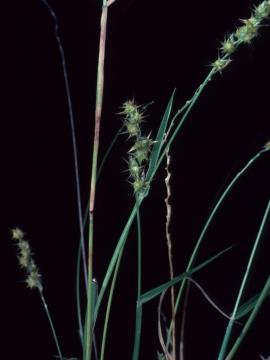