Blue heliotrope is a summer-growing perennial herb. It is extremely drought-hardy, which makes it a major agricultural weed in NSW.

Blue heliotrope is extremely drought-hardy, which increases its ability to persist and spread, and has made it a major agricultural weed in NSW. Blue heliotrope competes with desirable pasture plants and causes toxicity to stock. It is widespread and adaptable to a wide range of soil and climate types. It occupies more than 110 000 hectares in NSW.

Heliotrope is not very palatable to livestock, and consequently tends to be avoided; however, some individuals continue to eat it indiscriminately. Heliotrope will be eaten if no other feed is available.

Continual ingestion by livestock of large amounts of heliotrope plants (either fresh or dried), or of their seeds as contaminants in stock feed, can cause liver damage and reduced productivity (see Table 1). In order of susceptibility, horses, pigs, cattle, sheep and goats can all be affected, with horses being the most susceptible.

All affected livestock species may become jaundiced and experience varying degrees of photosensitisation.

It has many hairy, branched stems radiating from a woody rootstock, and is highly aromatic.

Blue heliotrope has a strong, slender taproot that can be very woody. It generally extends to over 1 m, but has been observed at up to 2 m throughout the soil profile, with a complex system of lateral roots occurring at several depths.

The leaves are alternate, dull green, soft and tapered at both ends.

The flowers are bluish-purple with yellow centres. They grow in dense clusters along one side of a coiled stalk, often referred to as a fiddle neck.

Blue heliotrope is a native of South America, and was probably introduced to Australia as an ornamental plant in the latter part of the 19th century. It was first reported in NSW in 1908 in the Hunter Valley, and since then has colonised large areas in NSW.

Blue heliotrope is adapted to a wide range of habitats, and can reproduce from both seed and root fragments. Blue heliotrope spreads aggressively, as it produces many sticky seeds that adhere to animals and machinery. Seed can pass unharmed through the digestive tracts of most animals. Blue heliotrope can also regenerate from root fragments. It is most commonly spread by road graders, farm machinery, livestock, humans and the movement of water along watercourses.

Flowering is largely dependent on rainfall, but usually starts in November and continues through summer until March. In frost-free areas, the plant is capable of growing and flowering at any time of the year after rain. Established plants produce a flush of new growth in spring and autumn, flowering profusely at these times. In warmer areas, plants may flower and set seed as early as July. The fruit develops into two nutlets, each containing two seeds.

The plant is frost-susceptible, dying off in winter and regenerating from the vigorous root system in the following spring.

Blue heliotrope is often found along roadsides, in waterways, on non-arable country, in degraded pastures and on fallowed cultivation.

Major infestations occur in areas receiving more than 500 mm of rainfall per year, although it is also established in low-rainfall areas, such as the western districts of NSW.

The authors would like to acknowledge the work done by Royce Holtkamp, Jim Dellow, Graeme Kelso and Barney Milne, NSW Agriculture, and the comments made by Rob Walker, Royce Holtkamp and Col Mullen regarding the technical content of this publication.

Eradication of blue heliotrope is difficult. The effective control of this weed will usually involve a combination of the following options.

Overgrazing, which reduces competition from pasture, is a major cause of heliotrope infestation. Managing grazing pressure is critical to the control of this weed. Maintaining a vigorous summer-growing perennial pasture to out-compete blue heliotrope provides effective long-term control.

It is necessary to reduce the weed density using systemic herbicides before sowing a competitive perennial pasture. Advice on pasture management can be obtained from your local agronomist.

Where large infestations of blue heliotrope occur, sheep and goats can be used to manage heliotrope, provided a different group of animals is used each year.

The sheep rumen has a great capacity to degrade most of the poisons present in the plant. The merino has the greatest tolerance of heliotrope, but adult wethers should be used rather than breeding ewes or juveniles. British breed crossbred sheep are less selective grazers than merinos, and are more frequently affected by heliotrope poisoning.

The aim of this practice is to either improve the short-term heliotrope tolerance of crossbred sheep or to allow the same group of merino sheep to be used to graze the plant over two or three successive seasons.

Correct grazing management to reduce PA toxicity is even more critical if Paterson’s curse is also present. In this situation, stock can be exposed to PAs during summer from the heliotrope and during the cooler months from the Paterson’s curse, increasing the risk of toxicity occurring from prolonged grazing.

Horses, pigs and cattle should never be used in the grazing management of blue or common heliotrope.

Cultivation gives short-term control of blue heliotrope, but also has the potential to spread the problem. To reduce the establishment of new plants from root fragments, it is best carried out after application of a systemic herbicide. Follow-up seedling control is essential.

Systemic herbicides play a critical role in the control of blue heliotrope, by helping to destroy their root system. Only a registered herbicide, used according to the directions on the label, should be used to control a weed.

To improve the effectiveness of chemical control, herbicides should be applied to blue heliotrope when it is actively growing and commencing flowering (late February to March). Avoid spraying stressed plants.

Picloram 100 g/L + Triclopyr 300 g/L + Aminopyralid 8 g/L (Grazon Extra®)
Rate: 500 mL per 100 L water
Comments: Treat at flowering.
Withholding period: Where product is used to control woody weeds in pastures there is a restriction of 12 weeks for use of treated pastures for making hay and silage; using hay or other plant material for compost, mulch or mushroom substrate; or using animal waste from animals grazing on treated pastures for compost, mulching, or spreading on pasture/crops.
Herbicide group: I, Disruptors of plant cell growth (synthetic auxins)
Resistance risk: Moderate 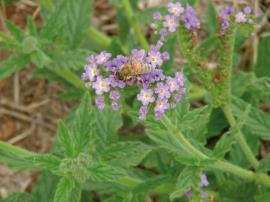 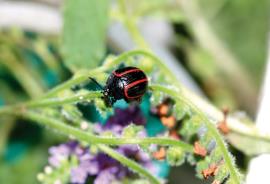 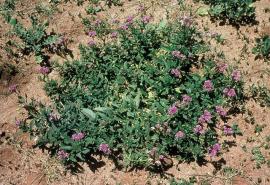 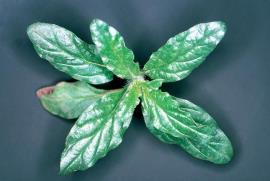 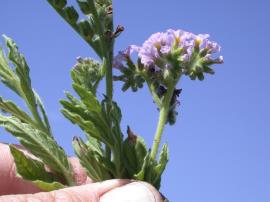 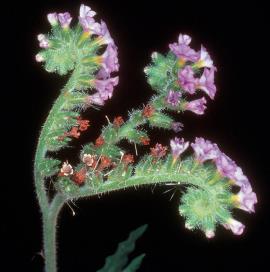