Scotch broom is an evergreen shrub. It competes with native plants and can alter the natural ecosystem or reduce stocking rates.

Scotch broom will smother desirable vegetation which reduces pasture stocking rates. They form dense thickets which can block access by humans and stock but harbour feral animals such as rabbits, foxes and pigs.

Scotch broom is toxic to humans and will cause discomfort and irritation, but is not life-threatening. The seeds and leaves are poisonous and can cause high blood pressure and nausea if ingested. If ingested in large amounts the toxins contained in scotch broom can weaken the heart.

Gorse and brooms are mostly confined to cool temperate areas of NSW, particularly the tablelands. Gorse is a problem in the south-eastern region of the state and the Blue Mountains. Some large populations of Scotch broom exist on the Barrington Tops and near Braidwood.

Originally, both gorse and brooms were planted as hedge or ornamental garden plants. Their main method of spread is now via seed by soil, water, machinery, footwear, stock and wildlife. The ability of the plants to shoot their seeds some metres away allows infestations to thicken quickly and to spread, particularly along water courses. Their pods burst open in hot weather during spring and summer, scattering seeds up to several metres from the plant. Seeds of these species have a hard coat that can delay germination for months or years, allowing large seed banks to develop. Seed can remain viable in the soil for many years.

Plants are normally at least two years of age before they are able to reproduce. Flowering mostly occurs from late winter to late spring. A second flowering may occur towards the end of summer and into autumn. Occasional flowers may be seen at other times.

Scotch broom is an upright, evergreen shrub that grows to 4 m high but more commonly 1–2 m high. There are other species in this family that are similar in appearance and can be difficult to tell apart from the species covered here, such as flax-leaf broom (Genista linifolia) and Madeira broom (Genista stenopetala). Hybrids between the different species may also exist. Brooms are characterised by a long seed life, seedlings that take two or more years to grow to seed producing shrubs, and adult shrubs that may live for several decades.

Its upper stems usually with five pronounced ridges and woody with numerous branches.

Leaves are shortly stalked, softly hairy with three leaflets per leaf. The middle leaflet is up to 20 mm long, other leaves are somewhat shorter.

The flowers are yellow and pea-like. They are 2 – 2.5 cm long, occuring singly or in pairs,

Brown to black pea-like pods have hairs that are confined to margins. Each pod is up to 7 cm long and 1.3 cm wide, it contains 5 - 22 seeds.

The seeds are yellowish-brown in colour to olive green. Oval shaped up to 4 mm long. They are smooth, rounded and slightly flattened.

Scotch brooms often become dense on river banks, forest margins, roadsides and other disturbed areas. They will also invade pastures and native vegetation. They are able to grow on a wide range of soil types and are able to flourish in areas with an annual rainfall over 500mm.

The control and management for gorse and brooms are similar. Management needs to address:

New infestations should be treated prior to plants flowering. Once plants begin to seed they are much more difficult to control and spread into other areas is more likely. While isolated patches may not seem a priority for some, they are more cost effective to control than larger patches. Any infestations left uncontrolled can lead to a rapid spread and increase in the problem. Tackle small, outlying infestations first and coordinate control with neighbours. Once established, these weeds are very difficult to eradicate. Control programs need a minimum of five years commitment, including yearly inspections to check for regeneration and regrowth, and follow-up treatment.

Integrated management programs are essential for long-term control. This involves using a combination of control methods to get the best possible results. Repeated removal of above-ground growth, by slashing, grazing or fire, will suppress plants but will not destroy them. Treatments that shatter the roots or herbicides that move though the plant and roots are required to kill these weeds.

Adult plants are typically not killed by burning. Fire kills above ground parts of the plant but plants regrow from the root stump. Also, fire does not kill the numerous seeds buried in the soil profile. Fire stimulates seed germination. Therefore any treatment using fire should be followed up with other treatments such as herbicide for at least five years.

These shrubs, particularly gorse, produce intense heat and flames when burnt, even in winter. There are large risks associated with the use of fire, including injury to people, property, and desirable plants and fauna. Fire can only be considered if these risks have been fully managed.

Plants should be removed well below the soil surface. This means of control is only appropriate for small scattered plants and seedlings and only when the ground is soft.

The stems of these shrubs are tough. Specialist equipment is generally used to break stems, to allow further access, and to avoid puncturing tyres. Mechanical treatments that go into the ground to shatter roots are considerably more successful than top removal treatments. The extra costs to get the job done properly are worth it. Mulchers are available that break sticks to fragments and shatter roots. Since slashers and choppers do not shatter roots, plants treated by these means will almost certainly need follow-up treatment. For long-term control, mechanical clearing should be used in combination with pasture establishment to provide competition, grazing, and herbicide treatments.

Property hygiene is important to reduce the spread of weeds. As gorse and broom seed is easily transported in mud, thoroughly check equipment, footwear, vehicles and animals for seed and wash down before leaving infested areas. Vehicles, bush walkers and horse riders should stay on tracks to reduce the amount of seed picked up on tyres, footwear and hooves.

Biological controls are best for large infestations that will not be disturbed.

Several biocontrols have been released in NSW including:

The Scotch broom gall mite is suitable for redistributing. Contact your local council weeds officer for information on using this biocontrol agent.

Herbicides are useful for both initial treatment and for treatment following other control methods. When using herbicides, it is important to follow the label recommendations. Herbicide control of gorse and broom frequently requires more than one treatment to be effective. The most appropriate applications are either foliar spray or cut stump methods. When applying foliar sprays ensure that the mixture is applied to the point of run-off over the whole plant, and use a penetrant or surfactant as directed on the herbicide label.

Picloram 100 g/L + Triclopyr 300 g/L + Aminopyralid 8 g/L (Grazon Extra®)
Rate: 250 or 350 mL in 100 L of water
Comments: Lower rate when actively growing mid-summer to pod formation. Higher rate for autumn-winter treatment.
Withholding period: Where product is used to control woody weeds in pastures there is a restriction of 12 weeks for use of treated pastures for making hay and silage; using hay or other plant material for compost, mulch or mushroom substrate; or using animal waste from animals grazing on treated pastures for compost, mulching, or spreading on pasture/crops.
Herbicide group: I, Disruptors of plant cell growth (synthetic auxins)
Resistance risk: Moderate 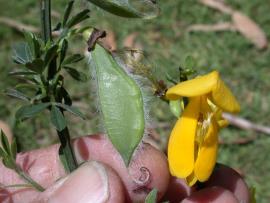 Scotch broom pods have hairy margins and are green at first. The flowers are bright yellow and pea-like. (Photo: John Hosking.) 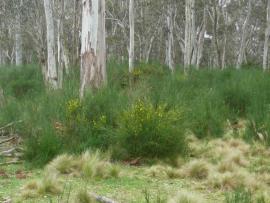 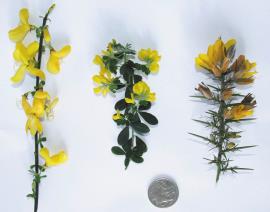 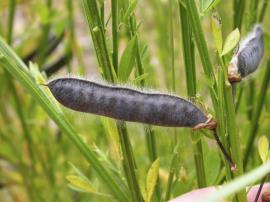 The ripe pods are brown to black. (Photo: Matthew Baker_NSW_DPI) 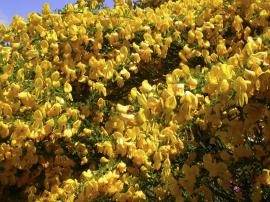