Water hyacinth smothers the surface of waterways, dams, irrigation channels and drains. It can rapidly take over an entire waterway and under favourable conditions it can double its mass every 5 days. It:

The large infestations of water hyacinth impact negatively on agriculture and infrastructure by:

Water hyacinth also has negative impacts on people and the environment because it:

Water hyacinth is a floating water plant. In cool areas, the leaves die off during frosts but the crowns survive and regrow the following spring.

Leaf shape changes depending on the density of infestations.

In open water or on the open-water edge of large infestations leaves are:

In dense crowded infestations leaves are:

When all the flowers on a flower stem have withered, the stem bends into the water. The fruit capsule then matures under water.

There are two types of stems:

Water hyacinth grows along the NSW east coast from the Queensland border to Kiama. The Macleay, Clarence and Richmond catchments have the worst infestations. Large infestations were present in the Hawkesbury River during the 1990s. Small remaining populations are still being controlled.

In inland NSW, water hyacinth was identified near the Gingham Watercourse Moree in 1955. By 1976 it had become a major infestation covering 7000 ha. Despite control efforts, a significant seed bank still remains across the region. It has since moved further west, threatening the Murray-Darling system.

Water hyacinth is native to the Amazon basin in South America. It grows on every continent except Antarctica. It was brought to Australia in the 1890s as an ornamental plant. The first record of water hyacinth in NSW was in 1895. By the early 1900s, it had spread along the east coast of Queensland and the north-eastern regions of NSW. In the early 1900s infestations in NSW's northern coastal rivers impeded river navigation.

Water hyacinth grows in tropical, subtropical and warm temperate climates. It grows best in still or slow-flowing fresh water with high nutrient levels. The ideal temperature range is 28-30°C, though it still grows well between 22 and 35°C. It stops growing when the temperature is below 10°C. Although it can tolerate mild frosts, severe frosts will kill the plant. It prefers water with a pH of 7 but tolerates a range of 4 to 8. It is very sensitive to salt water.

The seeds are released from the capsule underwater. Each capsule has between 40 and 300 seeds. The seeds either sink or accumulate in the floating plant mat.  Seed remains viable for up to 20 years in mud or soil. Seeds can be moved to new locations by water flows or via mud stuck to birds, machinery and footwear.

Water hyacinth infestations increase most rapidly by producing new daughter plants. Each plant can produce 2-4 daughter plants. Most of these are produced in spring to summer. During high water flows and flooding, plant masses can break up and move to new locations.

Plants are also spread by people:

Successful weed control relies on follow up after the initial efforts. This means regularly looking for any new plants or plant fragments and controlling them. Using a combination of control methods is usually more successful.

Control any new infestations as soon as possible.

Remove plants before flowering and seed set. A mass of water hyacinth removed from the water can take up to 12 months to break down. Contact your local council for advice on how to dispose of this weed.

Hand weeding is effective on small infestations, as long as the rate of removal can stay ahead of the growth of the plants. Take the plants out of the water and leave them somewhere to dry out. Manual removal is unlikely to be effective on large infestations.

Mechanical removal can be effective but is expensive. It takes between 600 and 900 hours to harvest one hectare of dense water hyacinth.

If water hyacinth has washed onto land in flooding:

Four insects from South America have been released in Australia for water hyacinth control. They are:

They have established across NSW but biological controls alone do not control water hyacinth. They reduce flowering and occasionally cause the plant mats to sink.

Niphograpta albiguttalis has established in northern NSW and Queensland. The larvae of both moth species tunnel into the leaf stalks and buds. Both moths are very damaging to young plants and luxuriant weed growth but their impacts are often temporary and patchy.

In tropical areas of Australia Neochetina eichhorniae has destroyed large infestations of water hyacinth. The adult is grey or black, 4-5 mm long. Adults feed on the young leaves and upper parts of the stalk. They lay their eggs in the thick, vase-shaped leaf stalks. Larvae tunnel through the plant tissue which eventually becomes waterlogged and can die. These weevils are inactive during winter.

Neochetina bruchi looks similar to N. eichhorniae but is slightly larger and a lighter brown colour. It damages the plant in a similar way to N. eichorniae but is more active through the winter. It is well established from northern Queensland to Sydney.

The weevils are still being reared and released in NSW. Contact your local council weeds officer, if you would like more information about biological control for water hyacinth.

Minimise nutrient run-off into infested waterways. Draining or lowering water levels can reduce the area of water hyacinth. Seeds remain viable and will germinate when the area refills with water.

Water hyacinth is usually treated with handgun power sprays from a boat or the bank. Some large infestations have been aerially sprayed.

Treatments with herbicides should be carried out early in the growing season (generally in spring).

Spraying large entire infestation will cause the weed mat to sink. It then rots, which can de-oxygenate the water and kill fish. To avoid this on large infestations remove as much water hyacinth as possible manually and spray one third of the infestation at a time.

Diquat 200 g/L (Reglone®)
Rate: 400 mL per 100 L of water plus 150 mL Agral / 100 L water
Comments: Small areas: spray to wet weeds thoroughly. About 1 mL of product should be sufficient to treat 1 square metre of weeds. See label for more comments.
Withholding period: Do not use treated water for human consumption, livestock watering or irrigation purposes for 10 days after application. Do not graze or cut sprayed vegetation for stock food for 1 day after application. See label for harvest withholding periods.
Herbicide group: L, Inhibitors of photosynthesis at photosystem I (PSI inhibitors)
Resistance risk: Moderate

Diquat 200 g/L (Reglone®)
Rate: 5.0 to 10.0 L/ha
Comments: Apply as overall spray wetting foliage thoroughly. Use higher rates for heavy infestations or for deep or dirty water. Oxygen depletion of decaying weeds may occur therefore do not spray more than a quarter of the area at any one time
Withholding period: Do not use treated water for human consumption, livestock watering or irrigation purposes for 10 days after application. Do not graze or cut sprayed vegetation for stock food for 1 day after application. See label for harvest withholding periods.
Herbicide group: L, Inhibitors of photosynthesis at photosystem I (PSI inhibitors)
Resistance risk: Moderate 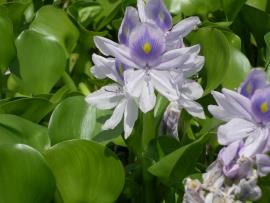 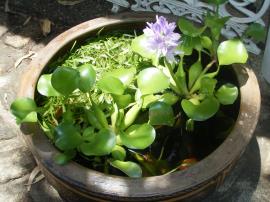 Illegal ornamental use of water hyacinth contributes to its spread. (Photo: Andrew Petroeschevsky) 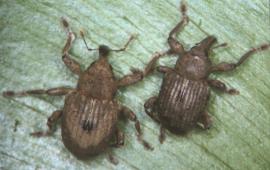 Water hyacinth infestations can be reduced by using biological control agents such as these weevils - Neochetina species. (Photo: Mic Julien) 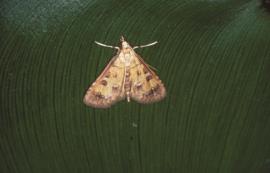 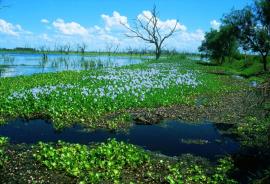 Some dieback and sinking can occur due to biological control agents. (Photo: Bob Tounce NSW DPI) 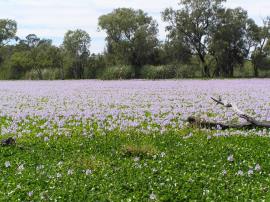 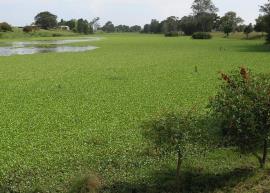 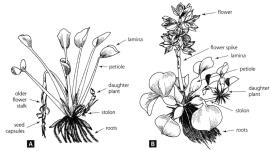 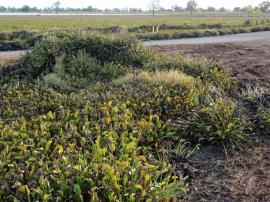 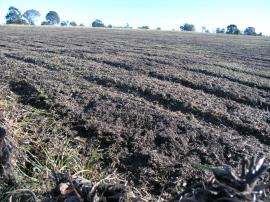