Cat’s claw creeper is an invasive, woody vine with yellow flowers. It kills trees and shrubs and reduces food and shelter for native animals.

Cat's claw creeper is a perennial woody vine that:

Cat’s claw creeper is listed as a Key Threatening Process in NSW because of its potential to impact on endangered and vulnerable plants as well as Lowland Subtropical Rainforest, which is an Endangered Ecological Community.

Cat's claw creeper is a woody vine with many stems. It can climb up to 30 m high on trees and other structures as well as creep along the ground forming dense mats. Plants may be well established before they start to flower. There are two forms of cat’s claw creeper, the short pod and long pod. The long pod variety only occurs in Queensland.

The following description is based on the short pod form.

It is native to Central and South America and the West Indies.

It is also a weed in southern Africa, south-eastern USA and Hawaii, Asia, the Pacific Islands, Republic of Cape Verde, Mascarene and Europe.

Cat’s claw creeper grows in subtropical, tropical and warm moist temperate climates. It can tolerate both heavy shade and full sun. It grows in a range of soil types but does not tolerate waterlogging. Plants can tolerate heavy frosts, drought conditions and saline soils. It grows:

Seed pods mature in late summer to autumn and seeds start dropping from the vines in late May. Most seeds fall in July and August. Seed viability is low but seed production is high and some seeds produce multiple seedlings. The seeds germinate best when covered by moist leaf litter rather than buried in soil. The winged seeds can be blown in the wind and spread by water along streams and rivers.

Established plants can reproduce from tubers and stems. Roots develop tubers in their second year. Detached tubers and stems sprout in moist conditions. The tubers can be spread in flood waters or by machinery if the soil is disturbed.

Successful weed control relies on follow up after the initial efforts. This means looking for and killing regrowth or new seedlings. Using a combination of control methods is usually more successful.. The methods chosen should be adapted to each situation, size and growth stage of the plant, and level of infestation.

Freeing mature native trees from the vine is a key first step if you are restoring areas of native bushland.

Actively check for new plants in uninfested areas and control these as soon as possible. Identify locations where cat's claw creeper occurs as isolated plants or sparse populations. Treat these plants first and remove nearby seedlings before working on dense infestations.

Follow up: Before the vine begins climbing other plants, keep checking and treating for at least 5 years.

Pull stems away from any trees or buildings they are using to climb up. Cut the stems so that there is a gap between the part of the plant that is growing in the ground and the upper part of the vine. It is not recommended to pull the climbing stems out of tree canopy, as this may damage desirable plants and can be dangerous if branches fall from the tree.

Seedlings and small plants have tubers that can be dug out. Removing the larger, tuberous root mass of older plants can cause excessive soil disturbance and may not be suitable in all conditions.

Tubers should be removed from the site as they can resprout. Contact your local council for advice on disposal.

There are two biological control agents for cat’s claw creeper in NSW:

Both of these species feed on the leaves. The jewel beetles feed up higher in the canopy than the tingid so it is useful to use both agents. The jewel beetle is still being reared and released in NSW. If you would like more information about biological control for cat’s claw creeper contact your local weeds officer.

When: Whenever new growth is present.

Where possible, when the vines have not grown too high, pull cat’s claw creeper down from desirable plants as it may be difficult to spray the leaves of the vine without also spraying the host. Use hand-held equipment to spray regrowth, seedlings and stems with foliage that is less than 2 m tall. This will minimise spray drift and off-target damage. Stems of the plant without leaves will not absorb herbicide. Spot spraying is often used as a follow-up control.

When: Anytime, but this method is most successful when new growth is present.

This is the best method for large plants. Cut the climbing stems first, at about 1–2 m above the ground to clear a work area. Leave the aerial parts to die. Re-cut all stems as close to the ground as possible. Cut and scrape the stumps of thicker stems. Apply each cut or scraped surface with herbicide within 15 seconds.

When: Anytime, but spring to autumn when new growth is present is usually the most effective.

Follow-up: Check for any missed aerial stems and treat using either cut stump or stem inject method as required.

Thick vines can be treated by drilling holes approximately 10 cm apart around the woody stem of the plant using a 10 cm drill bit. The holes are then filled with herbicide within 15 seconds. If large tubers can be found underground, these can also be drilled and injected with herbicide.

Cut stems about 50 cm from where they emerge from the ground and leave the upper stems to die in place. Scrape a strip of bark off one side of the lower stems and apply herbicide within 15 seconds to the scrape. Use a dye in the herbicide mixture so you can see which stems have been treated. 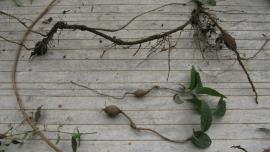 Cat's claw creeper smothers and kills other plants even high up in the canopy. (Photo: Royce Holtkamp) 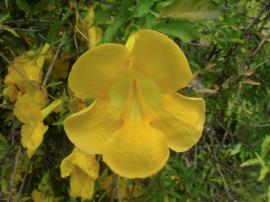 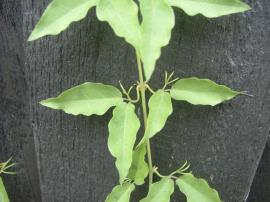 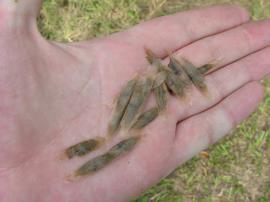