As the name suggests, mother of millions reproduces rapidly, producing hundreds of tiny plantlets which quickly form new colonies. It is adapted to dry conditions and can survive long periods of drought. This increases the plant's potential to persist and spread. Mother of millions is toxic when ingested by livestock; it is also poisonous to humans and household pets.

Mother of millions, hybrid mother of millions and resurrection plant are all poisonous when ingested. The toxic effects of these plants are due mainly to bufadienolides which cause heart failure. The toxins are present in all parts of the plant however, flowers are five times more poisonous than the leaves and stems.

Ingestion of the toxins can be cumulative and livestock eating small amounts, several times within a few days may suffer poisoning. Eating about 5 kg of mother of millions would kill an adult cow. Where the plants are thick, this amount would grow in a square metre.

Poisoning generally occurs when the plants are flowering – between May and October. Livestock are at a greater risk of poisoning if they have been moved to a new paddock, there is a feed shortage or during droving because they are more likely to eat the plant.

If livestock have eaten a large amount of plant, they may die suddenly of heart failure.

If they have eaten smaller amounts over several days, they may develop diarrhoea (sometimes bloody), drool saliva, dribble urine and then die of heart failure. Some affected livestock will recover slowly if small amounts of plant material have been eaten and their hearts are not badly damaged.

Poisoned stock must be treated within 24 hours of consuming the plant. After this period heart function is severely disturbed and stock may be too badly affected to survive. If you suspect livestock could have mother of millions poisoning, consult a vet immediately.

Mother of millions is also toxic to humans and household pets with dogs being particularly susceptible. It is unlikely that humans or pets would eat enough plant material to become poisoned. However, because mother of millions can be found in many gardens, the likelihood of human or pet poisoning is increased.

Mother of millions is a native of Africa and Madagascar and was introduced to Australia as a garden plant. It is a serious weed on the coast and the northwest slopes and plains of NSW.

The common name ‘mother of millions’ is based on the plant’s ability to reproduce vegetatively in large numbers. Each plant produces small plantlets along the edges of its leaves which detach and form new plants. This makes mother of millions hard to eradicate and follow up controls are necessary. Mother of millions also produces numerous seeds which can survive in the soil for a number of years before germinating.

Mother of millions belongs to the genus Bryophyllum. Mother of millions is a succulent perennial plant growing 30 cm to 1 m in height. The stems are pinkish-brown or greyish in colour. The leaves are pencil-shaped, pale green to pale brown in colour with dark green patches and a shallow groove on the upper surface. There are up to seven projections at the tip of each leaf which when broken off can develop into new plants. The flowers are orange-red in colour and occur in a cluster at the top of a single stem. Flowering can occur from May to October.

Mother of millions is commonly found growing on gravel and sandy soils. It is a weed of bushland and disturbed sites such as roadsides, along fence lines, around rubbish tips and abandoned rural dwellings. It also occurs frequently along creeks and rivers where it is spread by floodwaters.

The authors would like to acknowledge the comments made by Steve Ottaway and Carol Rose regarding the technical content of this publication.

Preventing the spread of mother of millions is the best control measure. Learn to identify mother of millions and regularly check for it in winter when the plants are in flower and are easier to see. If found remove immediately using a combination of control methods including hand removal, fire, herbicide application and rehabilitation. Regularly check creek lines after floods for new infestations.

For small infestations, mother of millions can be removed by pulling up individual plants by hand. Once the plants have been removed they should be burnt; stored in black plastic bags until completely decayed or buried. All of these procedures will prevent regrowth from leaf fragments. Care needs to be taken when using this method of control as plantlets may detach from the leaves during removal and establish as new plants. Some regrowth will therefore occur and follow-up treatment will be required.

Permits may be required to light fires – check with your local NSW Rural Fire Service for permit details. For large infestations, fire is the most economical control option available and will kill the plants and much of the seed stored in the soil. Using fire first will reduce the cost of any spray applications. When using fire, fence off infested areas to limit stock access and build up a fuel load. Control burn the area using a hot fire. In following years any regrowth should be spot sprayed. Some groups have reported a 30% reduction in mother of millions each year by using control burning with follow-up spot spraying.

Once removal of the infestation is complete the infested area should be revegetated with more desirable plants to provide competition to future mother of millions seedlings and plantlets.

This can be achieved by soil preparation, replanting, fertilising, controlling pests and grazing appropriately.

Some herbicides have a residual effect and this should be checked before attempting to revegetate.

Four insects have been imported into Australia for testing as biological control agents for mother of millions. Testing of the first and most promising insect, Osphilia tenuipes, a stem-boring weevil, has been completed. However, this agent appears to also attack closely related exotic ornamental plants. Therefore, approval for the field release of this agent has been delayed until issues surrounding the potential impact of this insect on the non-target ornamental plants have been addressed.
A South African citrus thrip (Scirtothrips aurantii) has occurred in Queensland from unknown sources and gives significant control.

Thorough spraying of mother of millions with herbicides is effective if sufficient wetting agent (non ionic surfactant) is used to penetrate the waxy outer covering of the plants – especially that of the plantlets. Mother of millions may be controlled with herbicides at any time of the year if the plants are not stressed, but infestations are easiest to see in winter when the plants are in flower. Spraying during flowering also prevents new seeds from developing. Late autumn or early spring may be a better option if the plants are lush and growing well, because they are more likely to readily absorb the chemical. In areas that regularly flood, avoid spraying when flooding is likely.

After spraying, plants may be more palatable to livestock so exclude them from the treated infestation by resting the paddock or erecting temporary fencing. Exclusion of livestock should continue until the plants are dead. It should be noted that dead plants are still toxic and still present a poisoning risk to livestock if eaten.

A number of herbicides are available for treating mother of millions. Spraying with herbicides may not be 100% successful therefore, the site should be monitored for regrowth and an appropriate follow up treatment carried out.

2,4-D 300 g/L (Affray 300®)
Rate: 70 mL in 10 L of water
Comments: Thorough even coverage of leaves
Withholding period: Do not graze or or cut for stock food for 7 days after application.
Herbicide group: I, Disruptors of plant cell growth (synthetic auxins)
Resistance risk: Moderate

Picloram 100 g/L + Triclopyr 300 g/L + Aminopyralid 8 g/L (Grazon Extra®)
Rate: 500 mL in 100 L of water
Comments: Apply at flowering, add a surfactant.
Withholding period: Where product is used to control woody weeds in pastures there is a restriction of 12 weeks for use of treated pastures for making hay and silage; using hay or other plant material for compost, mulch or mushroom substrate; or using animal waste from animals grazing on treated pastures for compost, mulching, or spreading on pasture/crops.
Herbicide group: I, Disruptors of plant cell growth (synthetic auxins)
Resistance risk: Moderate 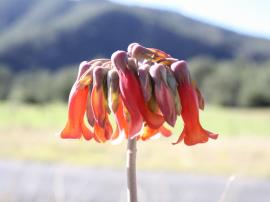 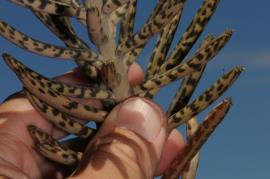 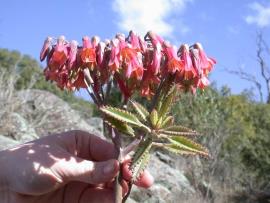