Nodding thistle is a tall spiny plant with large flower heads. It invades pastures and is not eaten by livestock.

Nodding thistle is a member of the family Asteraceae and is endemic to Europe, Asia Minor and North Africa.

It was introduced to Australia in the late 1940s as a seed contaminant.

In Australia, nodding thistle has proven to be an aggressive competitor of pastures. It occurs in dense patches and is not readily grazed by most stock because of its spiny foliage. Its presence also discourages animals from grazing other neighbouring pasture plants and it can affect the movement of stock.

It is difficult to control because of its long flowering season, prolific seed production, the longevity of its seed bank, a variable life cycle, and the ability to germinate at any time of the year provided there is moisture available.

Because it requires a period of chilling (vernalisation), nodding thistle is confined to cool temperate areas in Australia. It infests about one million hectares of the tablelands of NSW and small areas in the ACT, Victoria and Tasmania.

It is usually found on soils of moderate to high fertility in areas with an annual rainfall of 500–900 mm.

Nodding thistle can only reproduce by seed, with most falling close to the parent.

Long distance dispersal of viable seed by wind can occur, but is rare because the pappus detaches easily from the seed leaving it close to the source. Seed can also be dispersed in mud, agricultural seed and fodder and by water, vehicles, machinery and livestock.

Nodding thistle is an erect annual or biennial herb growing to 1.6 m high and commonly 80–120 cm in diameter.

The young plant first grows into a flat rosette. The rosette leaves are dark, shiny green and often have a whitish mid-vein. They eventually become deeply lobed and end in a rigid spine about 3 mm long.

Once the rosette is exposed to a sufficient period of low temperatures (vernalisation) it begins reproductive growth, resulting in stem production. In some high altitude locations this can occur at any time of the year.

Normally only one stem arises from a rosette and branches profusely 20 to 30 cm above the ground. However, if the crown is damaged, multiple stems are produced. The stems are slightly downy and have spiny wings that extend to just below the flower heads.

Stem leaves are light green or yellowish in young plants and grey-green, even dark green, with a prominent white central vein in older plants. They are deeply lobed and vary in size and shape depending on the age of the leaf and the position on the plant. The margins are spiny and each lobe is surrounded by rigid spines a few millimetres long.

The spectacular flowers are usually deep red but can be pink, purple, mauve or occasionally white. The individual flowers are tubular and have a musky fragrance – hence the name ‘musk thistle’ in some countries.

They form in a large head, usually 1.2 to 4 cm in diameter, at the ends of main stems or branches and are surrounded by numerous often purplish bracts that also end in a spine. The head droops at right angles to the stem, hence the name ‘nodding thistle’.

The main flowering season generally occurs from early November to late April, depending on the life cycle of the plant. Some plants may occasionally flower all year round, but once frosted they generally don’t set viable seed.

The seed is grey to yellowish brown, 3–4 mm long, and is topped by white hairs (pappus) that detach readily from the mature seed. In Australia, the seed bank from nodding thistle can be 100 times greater than in Europe and the seed can survive in soil for several years, depending on the habitat and the depth of burial.

Germination can occur at any time throughout the year after rain, although the highest germination rates generally follow the autumn break. Young seedlings are particularly vulnerable and control programs should take advantage of this.

Nodding thistle can display a varied life cycle depending on the time of emergence relative to winter. It can exist as a biennial, winter annual or summer annual so populations can contain plants of mixed ages.

Life cycle has a strong influence on the number of seeds produced by each plant with biennial plants producing more than winter annuals which produce more than summer annuals.

The authors would like to acknowledge the comments made by Royce Holtkamp, Bruce Clements, Todd Andrews and Birgitte Verbeek regarding the technical content of this publication.

Due to the longevity of the seed bank and varying life cycles in any plant population, nodding thistle requires a management plan persisting over a number of years. A plan should integrate all available methods of control including physical removal, cropping, perennial pasture management, grazing management, herbicide application, biological control, farm hygiene and regular surveillance.

Because the plant only reproduces from seed, the control effort should be directed at preventing seed production. The existing seed bank of a nodding thistle infestation could take up to 13 years to deplete because they are large and persistent. Hence the need for long-term, strategic control programs.

For scattered plants, grubbing is effective. Because the plant has a strong fleshy taproot, always remove at least the top 10 cm of the root system and invert the sod to expose the plant roots and prevent regrowth.

If flower heads show pink or reddish colouring or mature heads are present these must be removed and disposed of (by incinerating or composting in a sealed bag) as plants grubbed at this time may still produce viable seed. Slashing or mowing is an effective short-term measure but timing is critical (prior to seed production) and the treatment needs to be repeated often as plants can produce multiple shorter stems after slashing. Severed heads can still produce viable seed.

Cultivation can be effective for reducing the viability of the seed bank. Seed longevity is prolonged by burial so shallow cultivation to bring the seed closer to the surface assists in the rapid depletion of the seed bank. The subsequent fallow period should be as long as possible, to allow the control of emerging plants before sowing to a pasture or crop.

On arable land, a winter cropping phase of 1 to 2 seasons prior to the establishment of a vigorous perennial pasture can be effective in controlling nodding thistle. The crop provides initial competition to the emerging thistle seedlings, reducing the population. In-crop weed control using selective herbicides assists in reducing the seed bank.

Maintaining vigorous perennial pastures is critical to prevent nodding thistle invasion. Seeding rates, appropriate species, fertiliser application and grazing should all be managed to maximise the vigour of the pasture and competition for the thistle. Maintaining a strong, competitive perennial pasture is important as the development of bare patches, particularly during peak germination time, provides an ideal habitat for nodding thistle establishment.

The biological control of nodding thistle has been investigated in Australia since 1987. The present goal of the program is to limit seed production and eventually decrease thistle density in pastures by combining good pasture management with the introduction of the plant’s natural enemies.

Three biological control agents have been released in Australia for nodding thistle. Two of these are now established throughout areas where nodding thistle is present.

The seed weevil (Rhinocyliss conicus) was the first agent released. Unfortunately, it competes with the seed fly (Urophora solstitialis) early in the flowering season and lowers their numbers later in the season when nodding thistle produces most of its seed. Because of this competition, the seed weevil has not been redistributed beyond the original release sites.

The seed fly (Urophora solstitialis) was released in 1991. Eggs are laid into the developing flower and larvae feed on the cell that contains the embryonic seed. This reduces the potential seed set by inducing the plant to divert nutrients, intended for seed production, into forming a casing or gall around the larvae. It is expected that as the seed fly becomes more synchronised with the life cycle of the thistle, seed set each year will be reduced significantly.

Plants being attacked by the seed fly can be recognised by an obvious woody gall in the seed heads. These can be seen from a distance later in the season due to the retained pappus on the seed head.

The rosette weevil (Trichosirocalus mortadelo) was released in 1993 and it attacks the crown region of the rosette. The larvae feed on the central growing point and either kill the plant or prevent it from running to head and producing seed.

Plants being attacked by the rosette weevil will have a black discharge coming from the central crown area of the rosette.

The seed fly and the rosette weevil work together by reducing the vigour of the plant and the eventual seed set.

Some aspects of integrating biological control agents with other control methods still need to be explored. For example, the rosette weevil increases the palatability of nodding thistle to stock, so the survival of the weevil population may be dependent on the effect of grazing pressure. Also, the timing of herbicide application to the rosette stage of the plant may have an effect on the feeding rosette weevil populations.

Landholders need to consider these things in the management of nodding thistle if populations of the agents are present on their property. However, there are no guidelines available at present.

As with many weeds, nodding thistle is most susceptible to herbicides at the early seedling stage or when passing from the seedling to the rosette stage. While herbicides applied in autumn can be very effective, additional applications will be required to control new seedlings that emerge after treatment.

Therefore, the most efficient time to apply herbicides is during early spring when plants have just begun to grow upright stems. This ensures that viable seed is not produced and dispersed by the plant. New seedlings that subsequently establish are less likely to be vernalised and so will not flower before the following spring.

The success of herbicide control relies on spraying with the most appropriate herbicide, at the correct time and during favourable seasonal conditions.

Herbicide resistance of nodding thistle has been recorded in New Zealand so herbicide management strategies to prevent resistance should be implemented. 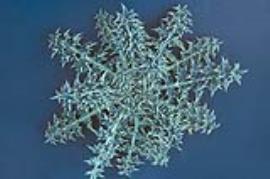 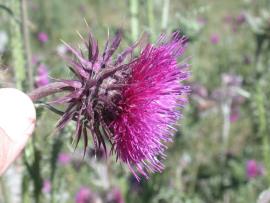 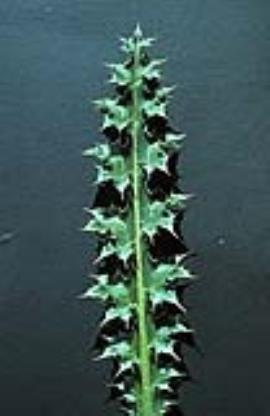