Groundsel bush is a densely branched, woody shrub with white to yellowish flowers. It invades pastures, plantations, wetlands and forests.

Groundsel bush is both an environmental and a forestry weed because it readily invades open to densely vegetated forests and bushland. Thousands of hectares of pine plantations in New South Wales (NSW) and Queensland are heavily infested.

Thick stands of groundsel bush can inhibit the movement of stock and reduce the productivity and carrying capacity of agricultural land. Therefore, the spread of the weed is of great concern to rural communities, especially where annual rainfall exceeds 1000 mm per year.

At the moment, it has not spread to its potential range, but threatens to do so. If coordinated control programs are not maintained it may rapidly fulfil this potential.

Groundsel bush is reputed to be poisonous to livestock although it seldom causes a problem because they rarely eat enough. However, livestock will lose condition rapidly if forced to graze it.

Groundsel bush is a serious weed of horticulture, cropping and grazing agricultural industries as well as forestry. It is also an environmental weed.

Groundsel bush is particularly invasive in some specific situations. These situations include:

Groundsel bush was first introduced into Australia as an ornamental plant and by 1900 had become naturalised in Queensland.

By 1930, it was a serious weed in south-eastern Queensland. By the mid-1960s, it was present in the Tweed, Richmond and Clarence catchments in northern NSW. Since then, it has gradually spread southwards along the coastal fringe to the Taree area. It is likely that groundsel bush will spread further in Australia.

Each female plant can produce more than 1.5 million seeds annually. The seeds are adapted for dispersal by wind and water because of the pappus, which remains attached to the seed for several days after release from the head. Under windy conditions during flowering, groundsel bush seed can be transported over long distances.

Seeds can also be spread by:

Half of the seed usually falls within 100 m of the parent bush, forming dense, impenetrable stands of the weed.

Groundsel bush is a densely-branched shrub, usually 1.5–3 m high, although it sometimes grows into a small tree up to 7 m high.

Stems are green at first but turn brown with age and have a characteristic striped bark.

Seeds are very small and light, about 3 mm long and weighing only about 0.1 mg. On the top of each seed grows tufts of white hairs (the pappus) which give the female plant its characteristic fluffy appearance when in full flower.

Groundsel bush is found in humid warm-temperate to subtropical regions. It is mostly found in disturbed areas such as coastal swamps, degraded pastures and forests where the understorey has been removed.

Groundsel bush tolerates a wide range of soil types and pH levels from 3.8 to 8.2 and is very tolerant of waterlogged, acid and saline conditions. It is also resistant to damage from salt spray.

Groundsel bush is frost-tolerant and occurs naturally in North America where there are regular winter snowfalls. This means that in Australia it could spread inland to colder climates where the habitat is favourable.

A variety of measures are available for controlling groundsel bush effectively.

Young plants are easy to pull out as they have a shallow root system. Care should be taken, however, to remove all the roots to prevent regrowth.

Widespread infestations of young plants can be controlled by cultivation, but seedling regrowth can occur if competitive pastures or crops are not sown soon afterwards.

In the case of very large bushes, bulldozing may be the most effective first step.

Large infestations of young groundsel bush are slashed in some areas. Slashing suppresses flowering and reduces the spread of seed.

Control of widespread infestations of groundsel bush by goats is also worth considering. However, investment in goats as a control measure will require goat-proof fencing and some knowledge of goat husbandry. Goats are only effective if the infested area is grazed intensively. They can also destroy other desirable vegetation unless precautions are taken to protect it with effective tree guards or other deterrents. Goats are not suitable where wild dogs are a problem.

Pasture improvement costs should be compared with the cost of future weed control costs. consult your local agronomist or your agronomic advisor for advice on the pasture plants and establishment techniques most suitable for your situation.

Reafforestation to control groundsel bush has been tried in a number of situations. this is only successful when good forest management methods are adopted.

Biological control of groundsel bush is only a management tool in core infestation areas. at this stage, biological control cannot be relied upon for short-term, comprehensive control; other techniques should be used, including mechanical and chemical means.

The gall-forming fly (Rhopalomyia californica), lives for only 4–5 hours, in which time it emerges from its pupal stage, mates, finds another groundsel bush, lays eggs and dies. Eggs are laid on the shooting tips and stems and after hatching from the eggs the larvae burrow into the stems.

The plant then forms a gall of spongy tissue around the burrowing larvae, which grow and develop into pupae and eventually emerge as adults.

The effect of the galls is to reduce the growth and vigour of the plant and prevent flowering. Once flowering stops, the spread of seed is reduced, making it easier to eventually control the weed.

In the mid-1980s, two stem boring agents, a beetle (Megacyllene mellyi) and a moth (Oidaematophorus balanotes), were introduced into northern NSW. Larvae of both agents tunnel into the stems of groundsel bush, causing dieback and even death of the plants in some cases.

The stem borers, particularly O. balanotes, have successfully established and can be found over a wide area. However, their effect has been sporadic, mainly reducing the vigour of the plant or causing partial dieback.

Another stem borer (Hellinsia balanotes) is also widespread and established. It is very damaging to groundsel bush but unfortunately the plant rapidly recovers.

A rust fungus (Puccinia evadens), was first released into south-eastern Queensland in 1998. During the following years, numerous releases were undertaken, including a number of sites in northern NSW. Early indications showed promising results for the establishment of the rust. It is hoped this rust will be able to complement other biological control agents and assist with the longterm, integrated management of the weed.

Spray actively growing plants. Type of herbicide and rates vary depending on the size of the plants. See details below and labels for details.

Use basal bark application for plants with stems up to 5 cm diameter at the base. Liberally spray the bark around the stem from ground level to 30 cm high, wetting thoroughly to the point of runoff.

Liquid herbicide mix: Stems should be cut less than 15 cm above the ground. Apply herbicide mixture to the cut surface and the sides of the stem immediately.

Gel herbicide: Cut stems horizontally preferably no higher than 10 cm above the ground. Apply a 3–5 mm layer of gel for stems less than 20 mm and 5 mm layer on stems above 20 mm

2,4-D 300 g/L (Affray 300®)
Rate: 100 mL in 10 L of water
Comments: Thorough even coverage of the plant is necessary
Withholding period: Do not graze or or cut for stock food for 7 days after application.
Herbicide group: I, Disruptors of plant cell growth (synthetic auxins)
Resistance risk: Moderate

Picloram 100 g/L + Triclopyr 300 g/L + Aminopyralid 8 g/L (Grazon Extra®)
Rate: 250 or 350 mL in 100 L of water
Comments: Use lower rate on bushes 1–1.5 m high in spring and summer; use higher rate on bushes over 1.5 m high in the autumn.
Withholding period: Where product is used to control woody weeds in pastures there is a restriction of 12 weeks for use of treated pastures for making hay and silage; using hay or other plant material for compost, mulch or mushroom substrate; or using animal waste from animals grazing on treated pastures for compost, mulching, or spreading on pasture/crops.
Herbicide group: I, Disruptors of plant cell growth (synthetic auxins)
Resistance risk: Moderate 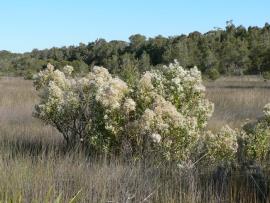 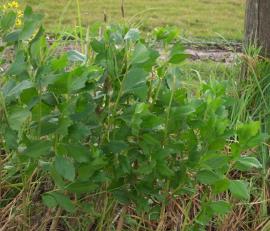 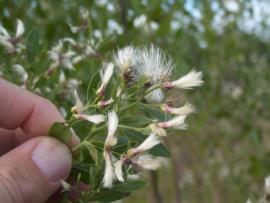 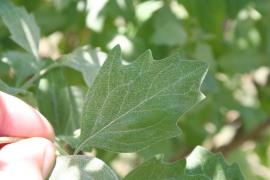 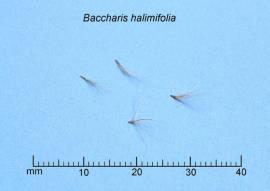 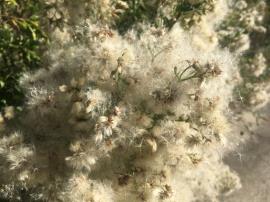 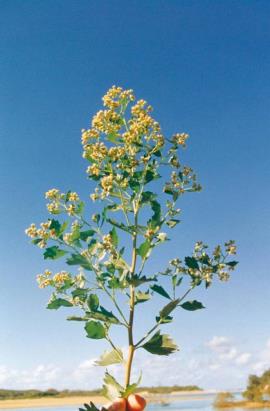 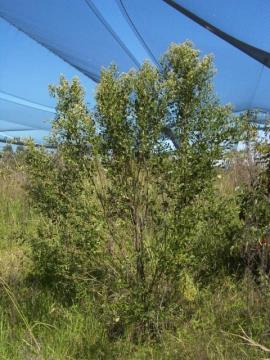