Sagittaria is an aquatic weed in New South Wales, capable of aggressive growth and rapid spread.

In natural systems the vigorous, choking habits of sagittaria threaten native aquatic flora and fauna. Dense infestations restrict water flow and can substantially alter the flow regime of catchments and waterways affecting biodiversity and stream health. In irrigation systems both species are capable of reducing flow and effectiveness of water delivery. The plant biomass fills the channel bed reducing the volume available for water storage and trapping silt, gradually reducing the capacity of the channel. Infestations also have detrimental impacts on recreational activities such as fishing, boating and swimming, and reduce visual amenity of waterways.

Sagittaria is native to North America and was introduced to many continents as an ornamental plant. It was first identified in Australia in 1959 near Brisbane, and then in Victoria in 1962. During the 1980s sagittaria’s distribution and density spread rapidly, and it is now widely dispersed in southern NSW, particularly in the Murray Irrigation District and is common in waterways around Sydney and Newcastle. It also occurs in waterways on the mid north and far north coasts and there is an isolated infestation in the northern inland region near Bingara. Recently two new infestations were recorded at Western Plains Zoo at Dubbo and another at Bega on the south coast. At present it is not widespread in other catchments, however it has the potential to spread and become extremely problematic.

Sagittaria can reproduce via several methods. It is a prolific seeder, with each plant having the ability to produce hundreds of thousands of seeds. It can also reproduce vegetatively by stem or root fragments, and can reproduce from underground rhizomes and corms. These reproductive options allow both species to spread rapidly, survive adverse conditions and resume growth when conditions are more favourable.

Seed production occurs from September to May. Seed can either germinate immediately or remain dormant only germinating when conditions are favourable. Seed may be dispersed via animals such as stock and birds or by water currents.

Seed can float for up 3 weeks before sinking. This ability aids in dispersal. The stimulus for germination includes sufficient light and water absorption by the outer seed coat.

The corms produced by sagittaria are rounded fleshy organs that contain starch and form at the terminus of a rhizome. Corms can remain viable in the soil for many years. Observations from research suggest corms are produced in response to periods of stress such as the onset of winter, dry soils and herbicide application. However, corms can be observed in most infestations. The production of corms allows for rapid regeneration of sagittaria following periods of stress, rather than having to recruit from seed. Corms and rhizomes are dormant through winter and regenerate in spring.

After seeds germinate plants grow into grass-like seedlings which can mature into any of the morphological forms depending on conditions.

Sagittaria germinates from late winter to spring. If an emergent form develops, flowers appear soon after establishment and can continue until colder weather affects growth (around May or June).

Sagittaria is an emergent aquatic plant that belong to the Alismataceae family. Other similar-looking species in this family include arrowhead (Sagittaria montevidensis), alisma (Alisma lanceolatum), water plantain (Alisma plantago-aquatica) and star fruit (Damasonium minus). Table 1 summarises the differences between sagittaria, arrowhead and these similar-looking species.

Sagittaria is a perennial herb and can grow up to 150 cm tall.

Sagittaria has oval/linear shaped leaf blades with pointed tips, up to 25 cm long and 10 cm wide at the top of each stem (leaf stalk). It also has long narrow strap-like submerged leaves up to 50 cm long. Sagittaria stems are triangular in cross-section.

Sagittaria flowers appear in whorls or coils. Male flowers are 3 cm across with three white petals and yellow centres. Female flowers have no petals, resembling flattened green berries. Flowers appear below the height of the leaves during spring and autumn.

Sagittaria seeds occur in clusters, consisting of flattened and winged segments, 0.15-0.3 cm long with 1 seed in each segment.

The submerged rosette form develops following germination and can persist for several years without producing erect emergent stems. The emergent form develops when conditions are suitable. The rosette form does not produce flowers or seeds but can produce rhizomes and corms. This is one of the keys to the plant being able to survive and perpetuate without producing emergent stems.

Rosettes grow into emergent plants if water height is approximately less than one metre. This may be due to depth-related factors such as light reduction in deeper water which prevents emergent forms developing.

The broad-leaved emergent form arises from an energy-rich rhizome system. It tends to occur in slow-moving parts of channels and streams, along river banks and at the extremities of infestations. Infestations in drains tend to be established from seed, rather than from existing plants. The warm, shallow and slow flowing water in drains favours the settling and germination of seed and the growth of healthy, broad-leaved plants.

The third form of sagittaria is an emergent form with narrow leaves and an almost grass-like appearance. Compared to the broad-leaved form, these leaves give plants an ‘unhealthy’ appearance, and are thought to arise from depleted rhizomes.

Sagittaria will establish easily along the edges of irrigation channels (berms). The water depth and flow rates allow seed to settle and plants to establish. The smaller channels provide ideal conditions for infestation, as the water is generally warmer, shallower and slower moving. Fluctuations in depth allow plants to establish while the water is shallow. It prefers to grow where silt sediment accumulates such as in smaller channels and on the inside bends of larger channels. Once it is established in these areas further sediment is trapped, increasing the surface area that can be colonised by the plant’s rhizomes.

Physical removal involves excavation with machinery or manual digging by hand. Physical removal allows water movement to be restored quickly in waterways blocked by infestations. It is also a technique used in areas where herbicide use is inappropriate, such as near sensitive waterways or irrigation channels under continual use.

Appropriate hygiene and containment measures must be applied during manual removal to ensure plant fragments do not float downstream and establish elsewhere. It is also important when excavating to ensure the root and rhizome fragments in the soil are removed to avoid future regeneration.

Excavation can be labour intensive and costly and is generally avoided in irrigation channels where it interferes with the engineering structure of the drain. However in new and isolated infestations where eradication is possible mechanical and manual removal should be considered. By removing all viable plant material and following up with removal of regrowth, eradication is possible. Physical removal can be particularly effective to control isolated or new infestations.

Flumioxazin 15 grams /tablet (Clipper herbicide®)
Rate: 1 tablet for every 37.5 cubic metres of water to achieve 400 parts per billion.
Comments: For use on dense or established weed populations in enclosed water bodies, deeper than 0.5 m and larger than 37.5 cubic metres, or margins of larger, still water bodies. Throw tablets directly into the water to achieve uniform distribution of the herbicide. At least 50% of the weed biomass must be below the water surface. See label for further instructions and restrictions.
Withholding period: 14 days before using treated water to irrigate food crops. See label for withholding periods for other uses of treated water.
Herbicide group: G, Inhibitors of protoporphyrinogen oxidase (PPOs)
Resistance risk: Moderate

Flumioxazin 15 grams /tablet (Clipper herbicide®)
Rate: Inject solution into water body. 1 tablet per 37.5 cubic metres. Each tablet dissolved in at least 20L of water + 0.5 - 1.0% adjuvant/surfactant
Comments: For use on dense or established weeds in water bodies less than 0.5 m deep or with a volume less than 37.5 cubic metres. Dissolve tablets in water (at least 20L per tablet) mix thoroughly and then inject the solution directly into the water body.
Withholding period: 14 days before using treated water to irrigate food crops. See label for withholding periods for other uses of treated water.
Herbicide group: G, Inhibitors of protoporphyrinogen oxidase (PPOs)
Resistance risk: Moderate 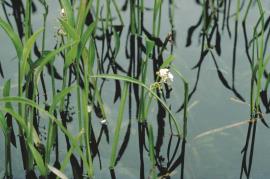